Over the last decade, train network and traffic in India have seen monumental growth, and are bursting through the seams now. But there’s further scope for growth, and over the next few decades, this graph will continue to skyrocket. Indian Rail passengers of this day and age want to know more – beyond just ‘an’ ETA of ‘a’ train at ‘a’ station. As the volume and complexity of information increases, new methods of information dissemination will be required. RailRadar™ HotSpots is an attempt down that line. 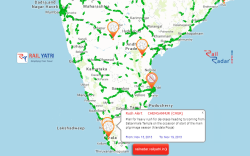 What kind of effects can the RailRadar Hotspots have on train travel?

You might think that the occasional hotspot events and incidents are no big deal, and they can’t touch you. But they can! Some of the commonest after-effects which we have tracked are as follows –Widespread cancellation of services, Changes in time schedule or route schedule, Delays, Rush in trains, Unavailability of seats, Accidents/Mishaps, Increase in crime, Increased cost of travel. Sounds a little frightening, isn’t it?

Okay, the RailRadar™ HotSpots display is great, but what is the real value of this to a train passenger?

Indian Railways runs one of the most complicated systems in the world and touches upon millions of citizens every day. Every day, hundreds of announcements, events, and incidents occur on this network which has the potential to impact travel to thousands of locations.

Besides the usual usage of train tracking, it’d be wise to use RailRadar™ HotSpots during scenarios such as –

How can Rush Events be important enough to vastly affect train travel?

In preparation for RailRadar™ HotSports, our research team looked at reports and events which have occurred over the last 3 years across the country, where a large crowd have gathered at a location in lieu of an occasion. They concluded that gatherings which have the following characteristics are known to affect train travel in some way –

Since Railways is a preferred mode of travel for a large chunk of the people attending these events, the train schedules are bound to be caught in a whirlwind. And that’s where RailRadar™ HotSpots can come to your rescue.