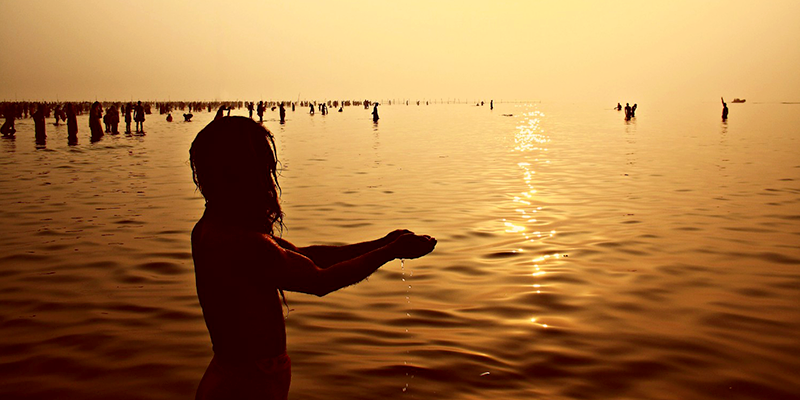 Gangasagar (or Sagar Island) is an island along the Ganges delta where the holy river Ganges meets the Bay of Bengal. This small island is best known for the annual Gangasagar Snan (bath) or pilgrimage. There is a popular religious saying that “other pilgrimages can be taken again and again, but the holy dip in Gangasagar can cleanse souls in one journey”. With that belief, and an earnestness to seek Moksha every year lakhs of devotees make their way to the southern tip of Sagar Islands.

History of the Pilgrimage 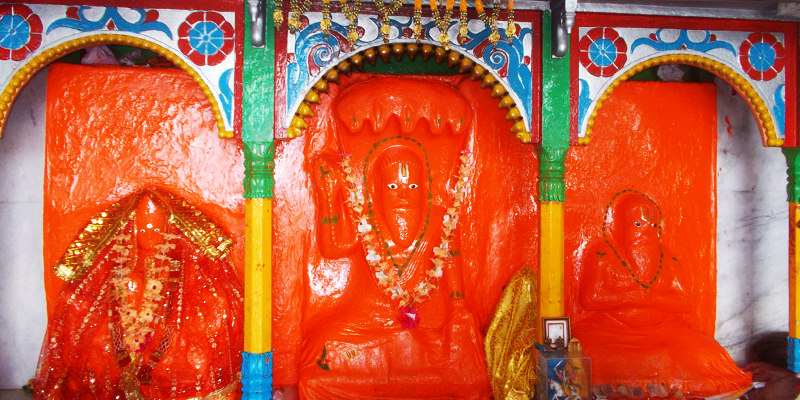 As the story goes, Kapil Muni resided on this island and in an act of anger he turned the sons of a local king into ashes. Later on, Kapil Muni got sympathetic to the king and asked him to worship Shiva. The king worshipped Lord Shiva and when he appeared requested him to ask Parvati to come down to earth in the form of Ganga. She obliged and the king’s sons got back their life. From then on it is held to be a holy place. The pilgrims expect all their wishes to be fulfilled after a dip in the freezing waters.

Expected Rush: This year, more than 15 lakh people are expected to visit the Sagar Islands on the eve of this event.

Dates for the Holy Bath: Though the holy snan (bathing) is held on the eve of Makar Sankranti, which falls on January 14 this year, the baths are taken by pilgrims across three days starting from January 13-15.

Special Trains: A number of special trains will be run between Sealdah and Namkhana from January 12-16 to meet the rush of pilgrims to Sagar Island.

Special Buses: The state government will also run lots of Government buses to Sagar Islands from all major bus depots in Kolkata and Howrah. 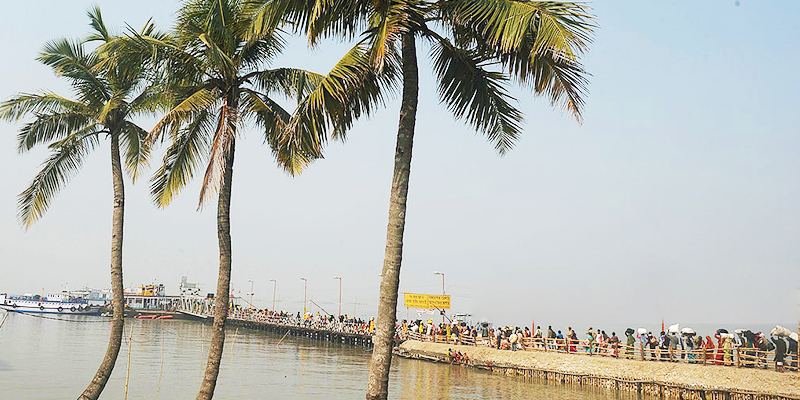 Ferry Services: The state government has announced that 90 vessels will be used to ferry the pilgrims to the island. This will contain 5 barges for smooth transportation of vehicles.

At the Venue: There will be 6,000 volunteers and many helpdesks arranged at the venue to help the pilgrims. Apart from this, 20,000 stationary toilets will be placed for the convenience of pilgrims.

Gangasagar Fair:  On the eve of this pilgrimage there is a large fair organised on the shores of Ganga near the Kapil Muni temple. This is the largest fair in West Bengal and one of the largest in the country. In this fair tribal artefact, traditional food and various other stalls are laid out on the fair grounds. The fair has been inaugurated on January 7 and would run until 15th of this month. 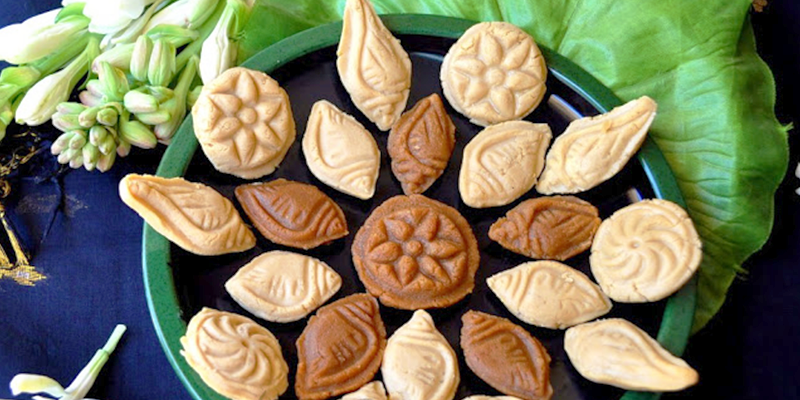 Eating: Makar Sankranti is the best time to taste some Bengali sweet. Date jaggery or Nolen Gur is only available at this time of the year and is used as the main ingredient in most sweets. It is also the season for some seasonal sweets such as Pithe, Patishapta and Dudh Puli. 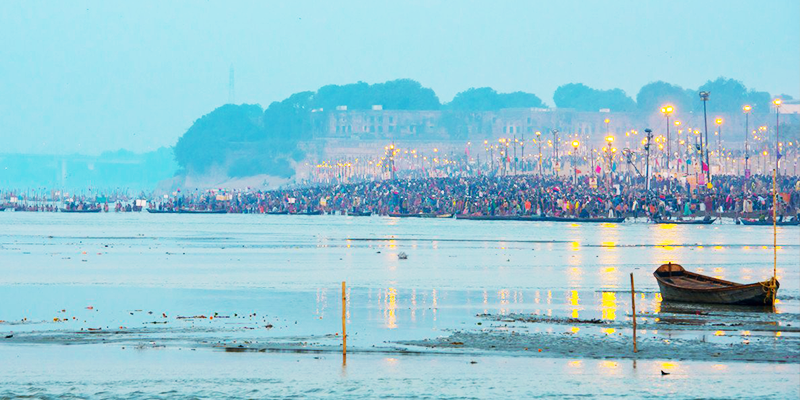 Best chance to get over Frigophobia: During the Gangasagar Snan, temperatures are chilling (drop below 10oC) in West Bengal and pilgrims have to take bath in ice cold waters in the wee hours of the morning. Taking such a bath is once in a lifetime experience and will definitely rid you of Frigophobia!

The Acrobatic Sadhus: Naga Sadhus, whose abode is supposed to be the mighty Himalayas, come down in heavy numbers to attend the bathing event. Often wearing white paint and smeared with ash, these devout Shivaites perform various forms of unbelievable Yoga, which leaves the tourists awestruck.

Stand in the Land of Mythology: Gangasagar finds a mention in many Hindu mythological texts dating including the great epics of Ramayana and Mahabharata. So, you are at a place where folklore heroes set their foot!

Costliest Cleanup Mission: As per reports, once the fair is finished there is an extensive cleaning campaign conducted on the islands. The human wastes and other left-over are cleaned by many volunteering groups and it takes more than a week’s hard work to reinstate the beauty of Sagar Island. 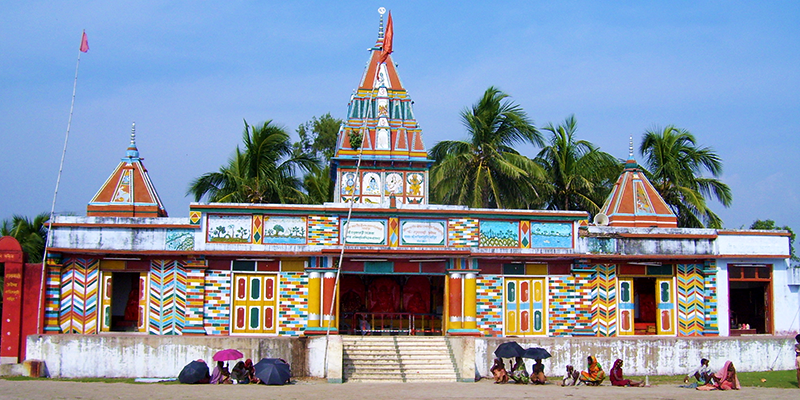 Kapil Muni Temple: The existing temple was built in 1973, but the original temple dated back to 1437. Three older dated temples were washed away by storms and sea. This temple is held very sacred by the pilgrims, for they visit the temple immediately after the Gangasagar Snan. Kapil Muni is represented by a block of stone in the temple and worshipped. The temple contains emblems of the Sea, Ganga Devi and Bhagiratha. 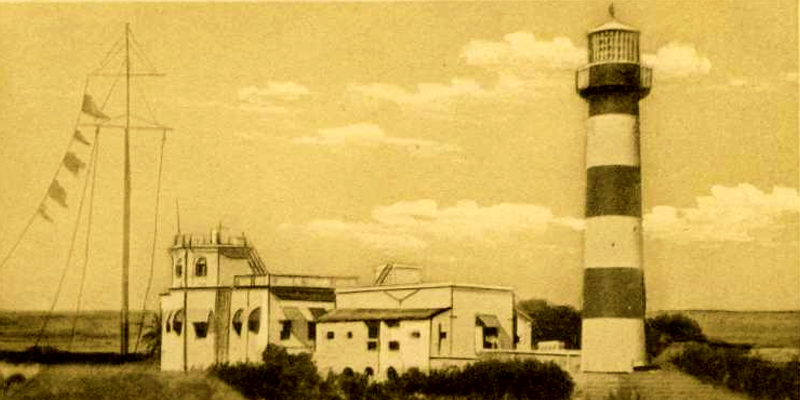 Sagar Lighthouse: Sagar Island is situated at the confluence of Bay of Bengal and Ganges. The beaches and the overall ambience of this place are most enjoyable for a nature lover. If you want panoramic views of the Sagar Island then visit the Sagar Lighthouse. Situated near the port of Beguakhali, tourists flock to this lighthouse to watch sunrises and sunsets. 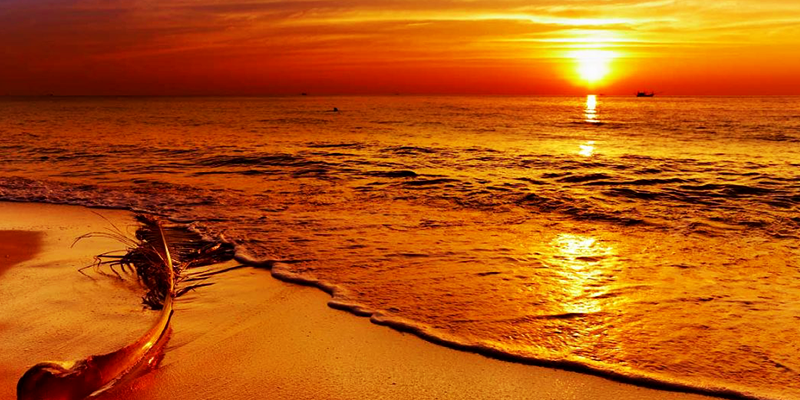 Herobhanga Island: It takes about 45 minutes via ferry to reach this island. Formerly known as the Lower Long Sand Island, this small island on the Bay of Bengal is known for its rich diversity of marine life as well as the presence of rare bird species. This treeless island, with sandy beaches, is a bird watchers paradise, especially in the months from October to March each year.