In our introductory note about National RailYatri Alert System (NRAS), we had alluded to how Indian Railways runs one of the most distributed yet heavily interconnected functional systems. Every day hundreds of announcements, events, and incidents occur on this network which has the potential to impact travel to thousands of locations – directly or indirectly – thereby affecting millions of travelers.

Every running train in a network runs on a pre-determined timetable – which has been constructed and planned, keeping in mind the constraints on the infrastructure (traffic, tracks, station capacity, etc.) which it uses on the route. These constraints cause interdependencies in a railway network. This essentially means that a change in a regular schedule in one location of the network may induce a change in timetable at another location in the network (for example – a schedule change at Kanpur Central may lead to a schedule change at Secunderabad). While railway networks all around the world lean on such dependences,– this after effect is more pronounced in a heavily loaded network like Indian Railways. This effect is also known as Network Effect.

As an example – imagine the scenario of an incident on a network as displayed below. Let us say a train mishap happened between two consecutive stations – Borkhedi (BOK) and ButiBori (BTBR) between Nagpur and Wardha on the Central Railway line. Let us see the kind of impact this incident can have on the entire Railway Network in India. In the map below – the red solid circle represents the place of the incident (between Borkhedi & ButiBori). The blue circle markers represent all the stations in India which can have an impact as at least one train from there travels to/through the place of incident. It is very possible to anticipate a network effect on the railway network as below – 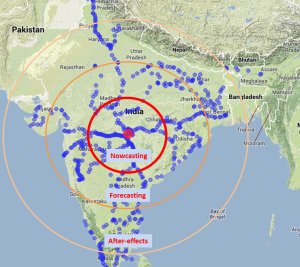 The key however is to correctly determine the radius of these circles of impacts – which may vary depending on the type or severity of the incident. NRAS gives us the flexibility to dynamically and in real-time determine these areas of impacts.

Get RailYatri train app – Your best friend on a train.