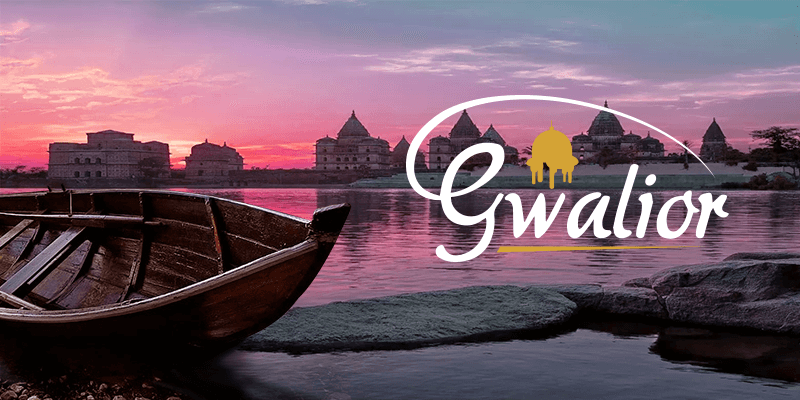 Known for its historic past, rich culture and architecturally rich monuments, Gwalior is a must visit city in Madhya Pradesh. Places to visit in Gwalior have the perfect recipe for a memorable holiday. You would be amazed by the array of Gwalior tourism options you have at hand while touring this historic city. Do not have scope for a long holiday? Well, even if you spare 48 hours from your busy schedule then you can ideally cover many beautiful Gwalior tourist places. So, here is a two-day Gwalior trip itinerary.

8 AM: Breakfast at Aggarwal Poha Bhandaar 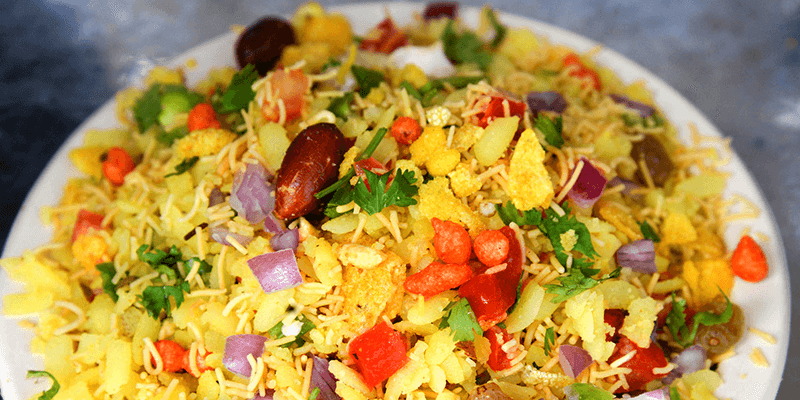 When in Gwalior, you have to taste the yummy Poha at Aggarwal Poha Bhandaar. The shop is situated down the Nayi Sadak towards Dal Bazaar. Though Gwalior is today populated with many Aggarwal Poha Bhandaars, but the best of them all is where we take you for a great breakfast. As you approach the shop you will come across a board on the pavement stating “Mashoor Aggarwal Poha Bhandaar”. As you approach into the shop you will witness a massive Tawa laded with Poha. The Poha here just melts into the mouth and leaves behind a lingering fragrance. So, gorge on moist and fresh poha. You might also have their delicious Dhokla. 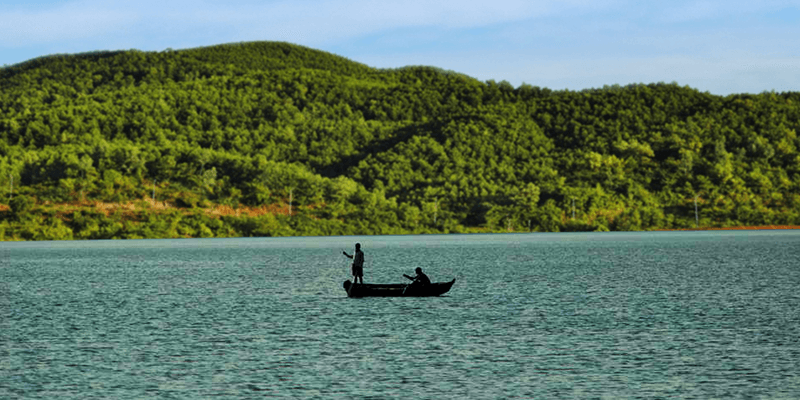 After a great breakfast, board your cab for a 30 minutes ride to Tighra Dam. Constructed in 1916, on the Sank River, this dam plays a crucial role in the life of every Gwalior dweller. Water to the city passes through the gates of this dam. The scenic shores of this dam have become a perfect picnic spot for the people residing in Gwalior. However, the tourists can indulge in boating at the Tighra Dam. There are different types of boats to choose among. You can opt for the slow moving paddle boats, or the fast speed boats, you can even take a ride in one of the water scooty. The boating experience here is amazing! 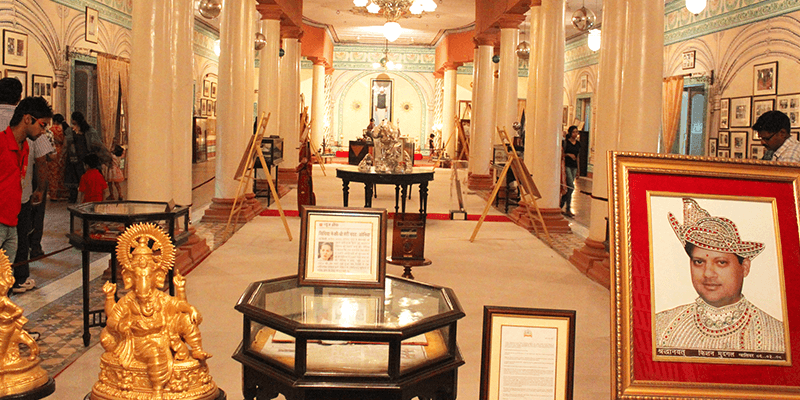 Situated some 18 KM away from Tighra Dam, the grand Jai Vilas Palace was constructed in 1874 and was the residence of the former Maharajas from the Maratha Scindia dynasty. The present members of this family still reside in the palace. The palace has 35 rooms which have now been converted into a museum and has rare pieces of art. The furniture displayed is exquisite and reflects the lavish lifestyle of the family. The palace’s Durbar Hall has massive chandeliers, all with gold detailing and a lot of glitter. The dining hall has a silver train, which was used to serve brandy and cigar post dinner.

Located at the heart of Gwalior city, on Captain Upmanyu Singh Marg (behind S.P. Office), Kwality Restaurant is all about good budget food. It is a very old and much popular restaurant in the city. Food lovers of Gwalior swear by the taste of food here. There is ample choices for vegetarians and non-vegetarians alike at the restaurant.

Post lunch take a short ride to the mausoleum of Tansen. Tansen was a legendary singer and is considered to be the father of Hindustani classical music. As you know, Tansen was one of the Navratnas at Emperor Akbar’s court and it is believed that when the musician died in Delhi, he was personally escorted back to Gawlior by the Emperor himself. His last rites were performed at this site and later the mausoleum was built to keep his memory alive. The mausoleum bears Mughal style of architecture and there are beautiful gardens on all sides. Apart from Tansen’s tomb, one would also come across the tomb of Sufi saint Muhammad Ghaus. It is believed that Ghaus was in fact Tansen’s teacher and like any grateful student Tansen wanted to spend his afterlife beside him. In December, the monument hosts the Tansen Music Festival that is attended by many leading musicians and singers. 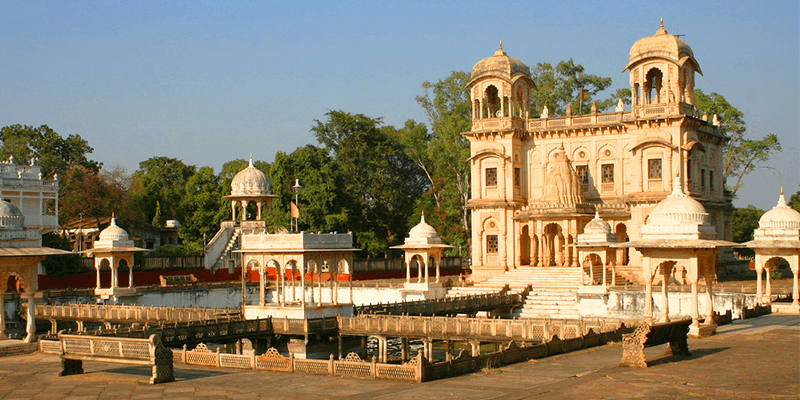 Chhatris of the Scindia dynasty are the prominent attractions of Gwalior. Known for their architectural beauty and grand appearance, Chhatris are a must visit while you are in Gwalior. The first Scindia chhatri was built at this site in 1817 as memoribilia for Jayaji Rao Scindia. Since then many such elevated and dome-shaped pavilions have been erected. While touring through the Chhatris do not miss the monuments built in honor of Jayaji Rao Scindia, Daulat Rao Scindia and Janko ji Rao Scindia. These Chhatris carry the beauty of medieval architecture and are decorated with various stone carvings of elephants, tigers and horses. The monuments have been built with white and pink stones. Also care to visit the beautiful tank built between the Chhatris of Madhav Rao Scindia and Maharani Shakya Raje Scindia. 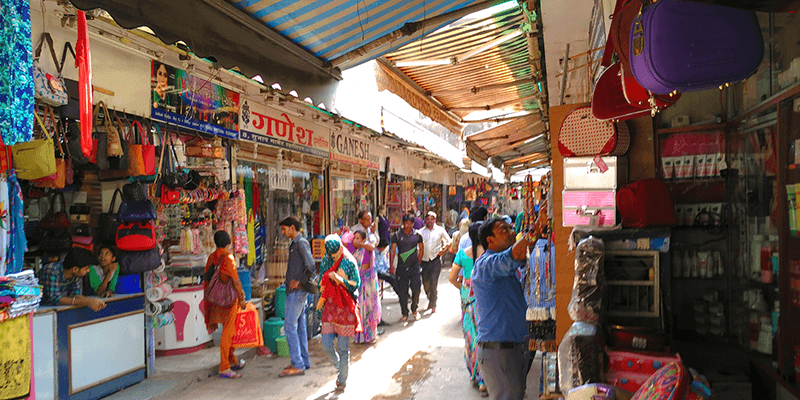 End your first day in Gwalior by taking a stroll through these two popular markets. You will find an array of traditional handloom, handicrafts, carved artifacts, clothes, apparel and a lot more. Buy what you want. While you shop, you will come across many street food stalls. Do satiate your hunger as and when required. You will be wasted for options. But do care to taste Karela Chaat, Lambi Paani Poori and crunchy Kachoris with a tangy Tamarind Chutney. For dessert, taste some fresh Imartis and Petha Gilori from Panchhiraj Petha at Phalka Bazaar.

8 AM: Breakfast at SS Kachoriwala

SS Kachoriwala is your destination for a great beginning to Day II. They are yummy and fulfilling. The man in front of the shop will fry a fresh batch of crunchy Kachoris just for you. With Kachoris already tasted, it is time to take a few paces ahead and visit the shop for Bahadoora ke Ladoo. Even as you get closer to the shop, your nostrils will be filled with the smell of Boondis fried in desi ghee. The Ladoo falls apart in a hundred pearls and melts into your mouth. 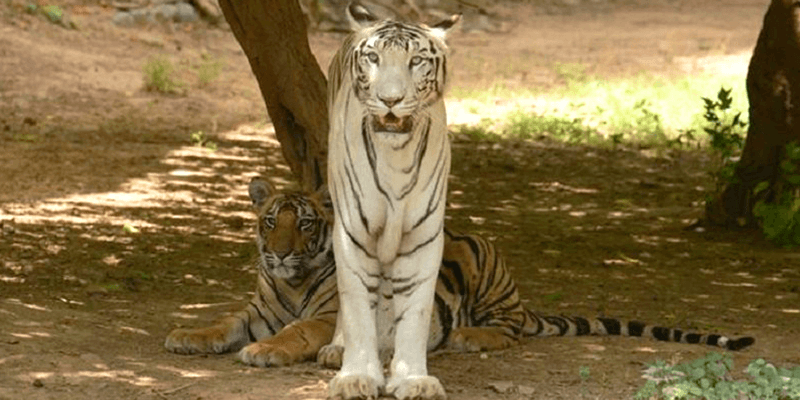 Situated in the Phool Bagh area of Gwalior, Gandhi Zoo (also known as Gandhi Prani Udhyan) is a beautiful zoo which serves as a home to many rare species of animals including the white tiger. Tourists can also see other animals such as Royal Bengal Tiger, Hippopotamus, Lion, Panther, Hyena, Bear, Sambhar and Spotted Deer, among others. The Gandhi Zoo was built by Madhao Rao Scindia in 1922 and was inaugurated by the Prince of Wales. It is a great option for a perfect family outing.

BOOK A HOTEL IN GWALIOR

After a tiring first half, you must head to the Volga Restaurant at Jayendraganj, Shinde Ki Chhawani, beside Syndicate Bank. The restaurant attracts colossal crowd almost every day due to the variety of food it serves and the prompt service. The prices charged are also pocket friendly. 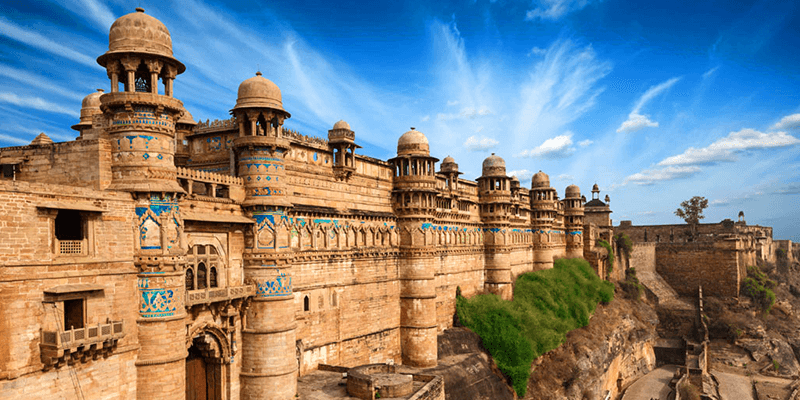 Gwalior Fort has to be the star tourist attraction of the city. The fort is so huge and holds so many places to visit that even 7 or 8 hours might not be enough to explore the Gwalior Fort to minute details. Though it is difficult to ascertain the exact construction timeline for this fort, but many inscriptions within its ramparts indicate that Gwalior fort existed even as early as 6th century. Perched on a hilltop and overlooking the glorious city of Gwalior, the fort has tourist attractions in every corner. Here are some that you should not miss: 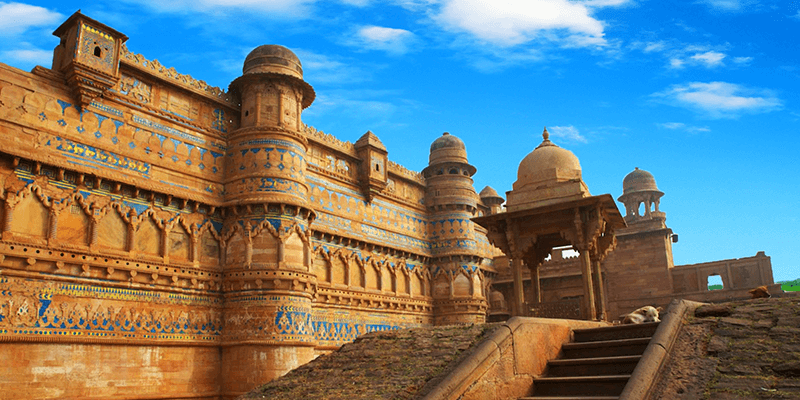 Man Mandir Palace: The first stop for any tourist is the Man Mandir Palace, which was built by Mansingh Tomar in the late 15th century. The vast chambers of this palace were once believed to have glittered with exquisite stones and tiles. Some remnants of those glory days still exist at the entrance of the palace. 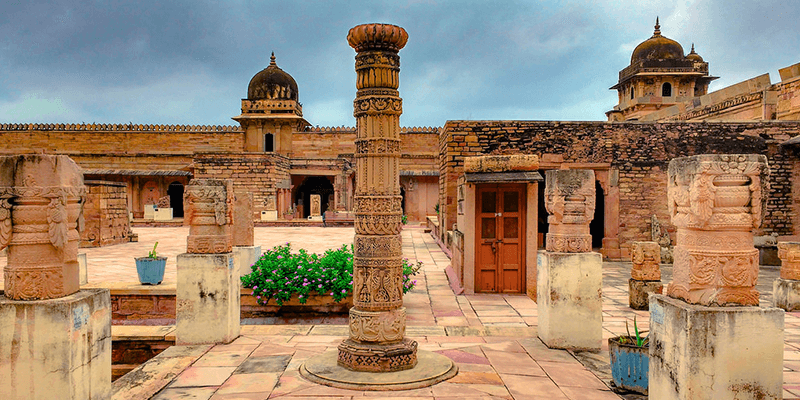 Gujari Mahal: This is a monument of love built by Man Singh Tomar for his queen of Gurjari descent, Mrignayani. There is a romantic tale associated with this monument. After the king had wooed Mrignayani, he granted her three wishes. So, Mrignayani asked for a separate palace that would have constant water supply from the River Rai. As a result, the grand Gujari Mahal was built. Today, the Gujari Palace has been converted into an archaeological museum and has many great relics that would enrich your trip experience.

Other Palaces: Other Mahals like Karan, Vikram, Jahangir and Gujari are testimonials of a splendid era. Most of these palaces were built during the glory days of Tomar dynasty and have grand architecture. 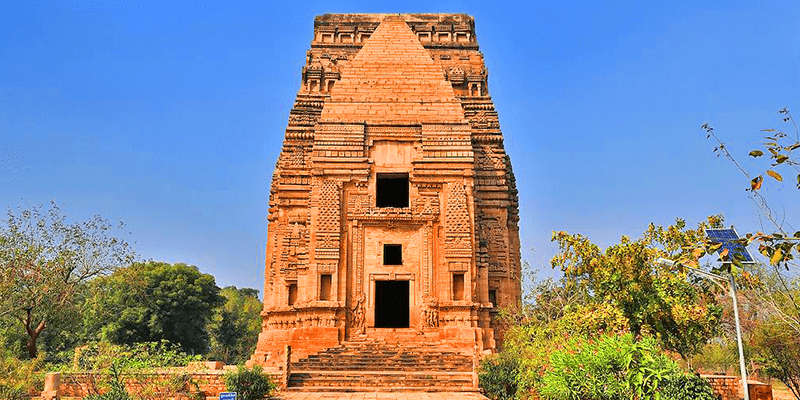 Teli ka Mandir: Built by the famous Pratihara emperor, Mihira Bhoja, it is a rectangular shaped monument that is a blend of the South and North Indian styles of architecture. Teli ka Mandir has a South Indian styled barrel vaulted roof and North Indian Nagari architecture inside. There are sculpted images of goddesses, flower decorations and even romantic couples inside the temple. The temple is dedicated to Lord Shiva, Vishnu and other goddesses. 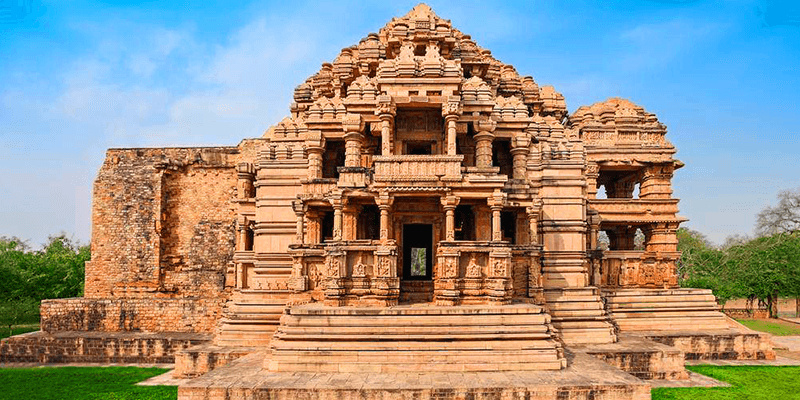 Sas-Bahu (or Sahastrabahu) Temple: This is another masterpiece of architecture. Sas-Bahu temple was built in 1093 and is known for its fine carvings and overall architecture. There are two temples within the same structure, one goes by the name of Sas while the other is called Bahu. Thus the temple is named Sas Bahu. It is dedicated to Vishnu in his Padmanabha form. 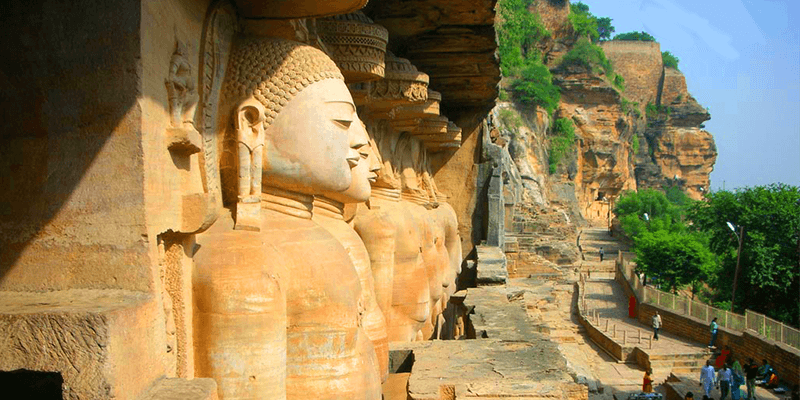 Gopachal Hill: Towards the southern part of Gwalior Fort, lies a series of rock cut Jain monuments. The height of these rock-cut monuments varies from 6 inches to 57 feet. The idol of Bhagwan Parsvanath in his padmasan posture is the most striking image here. 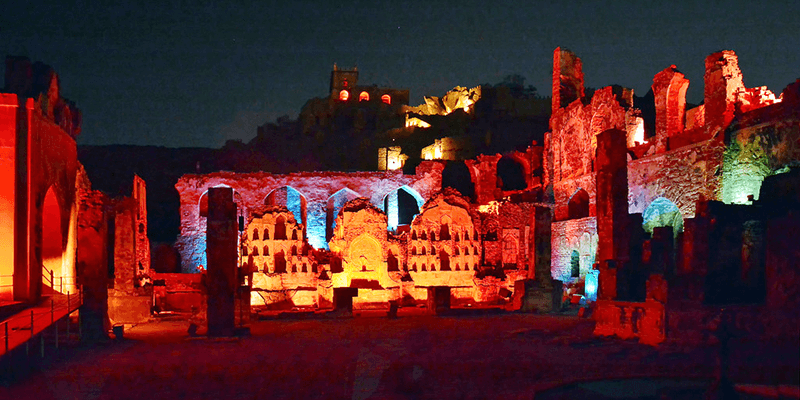 After you have gone through the amazing list of monuments in Gwalior Fort, it is now time to just sit back and enjoy the interesting Light & Sound show that is organized within the fort. The show is organized in two different languages near Man Mandir Mahal at the Fort’s Amphitheatre. Duration of the show is for 45 minutes, during which the history of this fort is narrated. Lights are used to create an astonishing visual appeal. What’s more, the narration you hear is provided by none other than Amitabh Bachchan! Calm and serene Sitar played by maestro Ravishankar adds charm to the entire show.

9 PM: Dinner at Virasat – The Heritage

After a tiring day within the ramparts of the Gwalior Fort, it is fitting to end the day dinning under the roof of an ancient building. Well the building for Virasat – The Heritage dates back to 200 years! This is the restaurant to visit for taste the traditional delicacies of Madhya Pradesh. The interiors contain paintings of many reputed Indian personalities of the yesteryears. Apart from the authentic local cuisine, one can also try the delicious Mughlai and North Indian platter here.

As you can see, even when time is short at hand, much can be achieved in Gwalior. Hope you liked this 2 day itinerary. So, till the next time, when you would present a new city, it is happy touring!