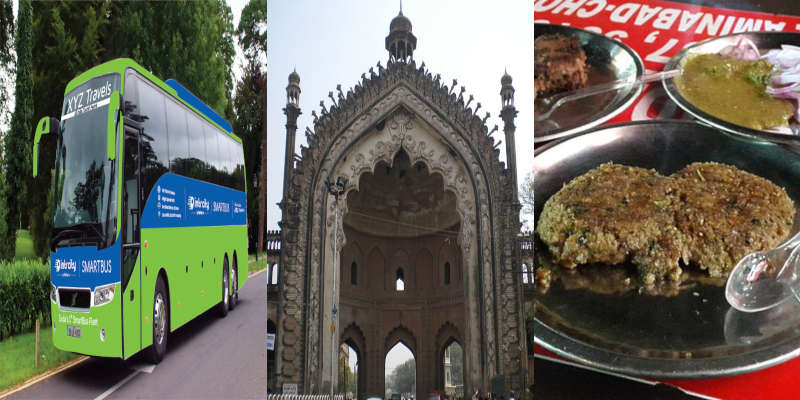 This is not just a slogan, but the way of life in Lucknow. For centuries, Lucknow’s exquisiteness has allured foodies, explorers and history buffs. Ringed around with unmatched cultural and rich artistic ambiance, this historic city unarguably remains one of the most attractive destinations in the country.

There’s another popular saying about Lucknow – they say, even a single day spent in this ancient city of Awadh will leave some really unforgettable beautiful memories etched in your heart.

Surely you’d be wondering – The whole of Lucknow, in just a day? Well yes. In this blog on IntrCity SmartBus Weekend Quick-Trips, we’ve planned a return trip for you from Delhi to Lucknow with IntrCity SmartBus by RailYatri and guess what, if you stick to the given timelines, you’ll be able to not just see some of the best attractions of the city of nawabs but also be able to satiate your taste buds with the most authentic food the city has to offer before you board your SmartBus back to New Delhi the same evening.

What’ll you need for this trip?

Have’em all? Then here’s the plan…

IntrCity SmartBus by RailYatri will drop you at Nahariya Chauraha. Once you’ve alighted from the SmartBus, we’re sure you’d be craving for some breakfast.

So, head straight to Sharma Ji Ki Chai. From its name, it may sound like a small time road-side tapri but it is not just another small tea stall as you’d have imagined. It’s a window kind of a shop and an entire area for people to stand and enjoy a cup of refreshing chai (with the most enchanting aroma & served in cutting tea cups) with Sharma Ji’s famous and most irresistible malai bun. 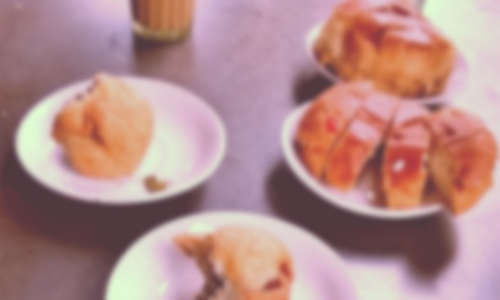 The place is thronged not just by regular visitors but thousands of tourists – both Indian and foreigners every morning.

One of world’s architectural wonders, this centuries old mosque has been built without any supporting structures such as metal or wood. Even the arched roof of this famous mosque is built without any beam or girder. Bara Imambara is visited by thousands of tourists and devotees for prayers every day.

This imposing gateway to the city of Lucknow is one of the most beautiful Awadhi style architectural wonders. 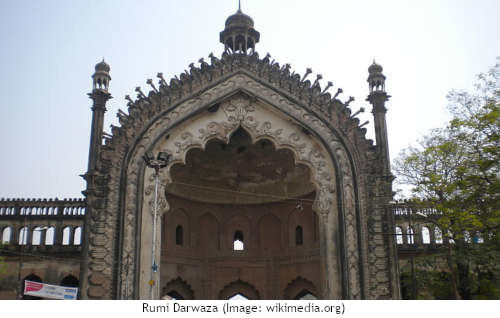 Also known as the Turkish Gate of Lucknow, this 60 feet high gate was built by Asaf-ud-Daula, the fourth Nawab of Lucknow. A must see when you are in Lucknow.

Husainabad Clock Tower was constructed in the year 1881 by the then Nawab of Lucknow – Nasir-ud-din Haider to welcome Sir George Couper, the 1st Lieutenant Governor of United Province of Awadh. Designed by Roskell Payne, the tower was built at a cost of Rs.1.75 Lakhs. 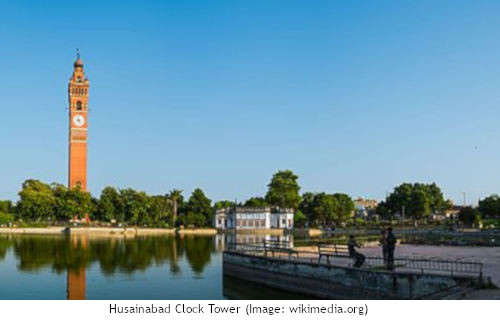 It reflects the Vicorian and Gothic style of designs. The dial of the clock of this tower is designed in the shape of a 12-petalled flower with bells around it while the gigantic pendulum is 14 feet long.

The (Cursed) Satkhanda is a partially constructed, unique building which attracts visitors’ eyeballs. A fine blend of French and Italian architecture, this incomplete monument was originally supposed to have seven floors and was meant to be taller than Qutab Minar. Satkhanda was designed to be the watchtower for the then Nawab Muhammed Ali Shah to see the whole of Lucknow and the moon during Eid. What makes it unique was that each level of this tower was built with diminishing height. 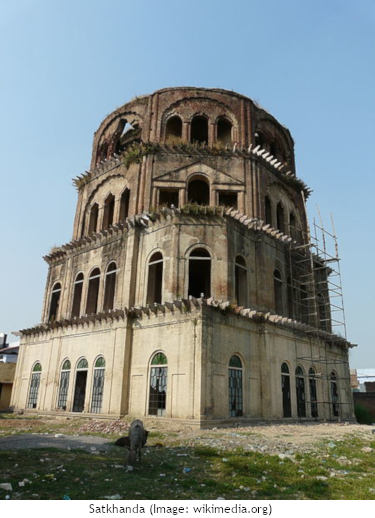 Three mystery theories appear as an answer to why it remained incomplete:

After the visit to the Satkhanda, it’d be a good idea you head to one of the oldest and most loved markets of Lucknow and the entire North India, the Chowk. It won’t be wrong to say that Chowk is a window into the rich cultural heritage of Awadh. Whether you’re looking to buy Lucknow’s famous Chikan & Zardozi dresses, handmade traditional jewelry, ittar or dig in to the juiciest and succulent kebabs, biriyanis, parathas, meat and milk dishes, Chowk has something for everyone.

Must Try At Chowk

Do try this famous mutton biriyani made with saffron-stained yellow rice and tender meat. 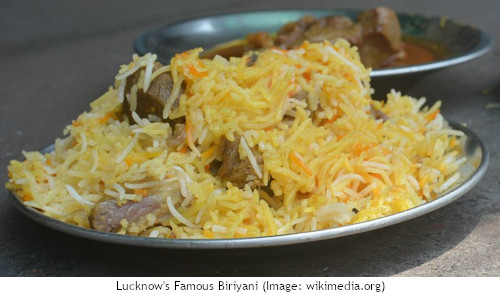 Even though this restaurant doesn’t have a proper seating arrangement, if you are a meat lover, you must surely get some packed for yourself.

This place is a heaven for meat lovers. Without any doubt, Tunday Kababi’s Gelawati Kebab with Ulta Parantha are the best in the whole wide world.

Legend has it that this kind of kebab was prepared specially for an old nawab who’d lost all his teeth but couldn’t manage without meat, and because the man who prepared them for the first time was limb-handicapped, they became famous as Tunday’s Kababs.

Wash it all down with a tall glass of Thandai – a buttercup-yellow drink which most visitors stop by for. 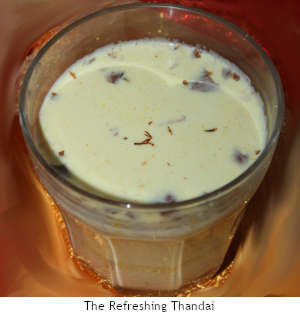 Flavored with loads of almonds, saffron and spices, Pandit Raja Thandai will surely make you come to Chowk every time you visit Lucknow.

Other Must Try Street Food at Chowk

After the lunch and some shopping, it’s time to head to the Chota Imambara

Also called the Hussainabad Imambara, the Chota Imambara built by Nawab Muhammed Ali Shah, the third Nawab of Awadh in 1838 is a famous tourist attraction of Lucknow. The Imambara was meant to be a religious monument for Shia Muslims and a place of the congregation during the festival of Muharram. 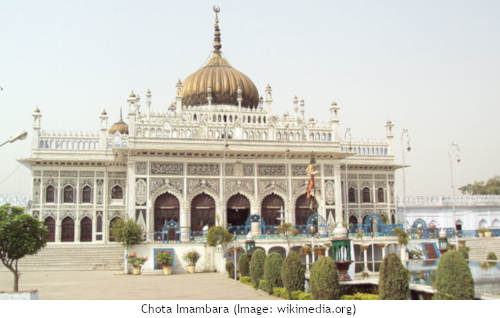 This architectural wonder of the 19th century, a fine mix of Indo-Islamic and Persian morphology became famous as the Nawabi Palace of Lights as it is adorned beautifully with decorations and lights during Muharram and other religious festivals. It is also the resting place of the Nawab and his family.

Ambedkar Memorial Park or Dr.Bhimrao Ambedkar Samajik Parivartan Prateek Sthal was built and inaugurated in the year 2008, during the regime of the then Chief Minister of the state of Uttar Pradesh Mayawati. As the name suggests, the park was built in the memory of the architect of the Constitution of India, Dr.Bhim Rao Ambedkar, Kashi Ram other popular dalit leaders of the country. 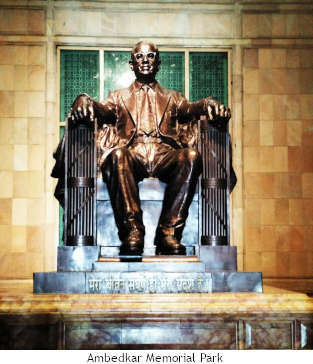 Built for a whopping 7 Billion Rupees with Rajasthani red sandstone and spread across an area of 107 acres, the park situated in Gomti Nagar Area of Lucknow has a 112 feet high Ambedkar Stupa (Sanctum), Pratibimba Sthal, Drishya Sthal and a Gallery. The park has countless pillars, elephant statues, and other formations. The entire place is illuminated with colorful lights in the night which add to its beauty.

One of the most popular memorials of Lucknow, The Kaisarbagh Palace is thronged by tourists all through the year. During 1948-1950, the then Nawab of Awadh Wajid Ali Shah ordered to build the Kaisarbagh Palace – the paradise garden. The ancient palace has beautiful Mughal and European architecture and incorporates banisters and Moorish minarets. Legend has it that the white stone structure called Baradari, built in the middle of the palace used to be covered with stunning silver. 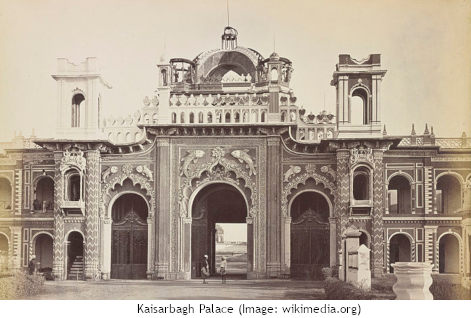 In the year 1858, some portions of this historic palace suffered damages as a result of attack by the Britishers.

Unarguably one of the oldest and the busiest shopping hubs of Lucknow, Aminabad market boasts of having seen the illustrious era of the Nawabs. A bargainers’ delight, one can find everything like lehengas, sherwanis, wedding clothes, sarees, utensils, books, artificial jewelry and local handicrafts at Aminabad. 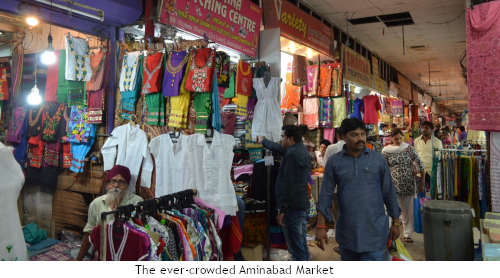 If you’re feeling hungry, you can head to one of the many famous food joints here like Wahid Biriyani, Madhurima, Kalika Chat House or to Prakash Ki Kulfi if you’re craving something sweet. 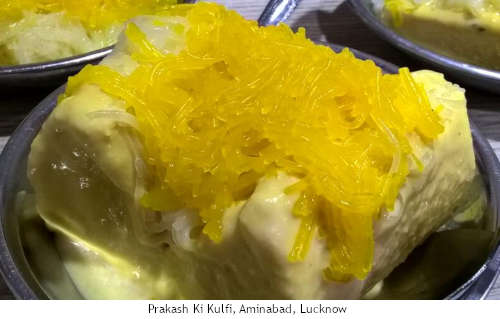 Assuming you’d have started from Sharma Ji Ki Chai around 7.30am in the morning, after approximately 12 hours of Lucknow Darshan, it’d be 7.30pm by your watch. You can now head to Avadh Chowk or Nahariya Chauraha which is about 9 kilometres from Aminabad to start your return journey to Delhi. It won’t take more than 40 minutes to reach. 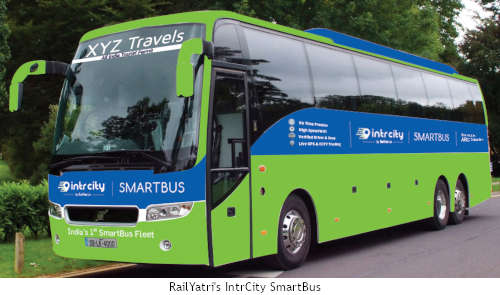 Before you board your IntrCity SmartBus, you can relax at our state of the art air-conditioned SmartLounge, a facility we’ve designed especially for our customers. You can simply sip a cup of coffee and listen to music, maybe complete your office presentation or simply pick some snacks from the canteen and roam around.

Some highlights of our SmartLounge include:

Liked our article, let us know in the comments below or feel free to drop us a line at feedback@railyatri.in.