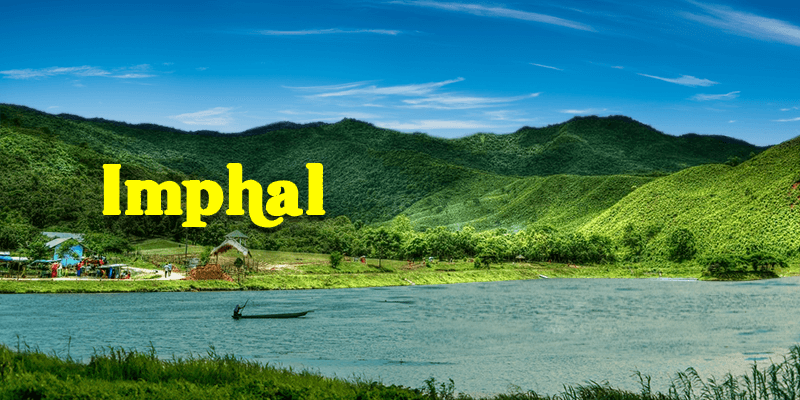 Imphal, the capital of Manipur, has so much to explore and discover. Historically significant and a heaven for adventure lovers, Imphal is an unusual and curious travel destination for the travel buffs. Imphal in Manipur is credited to have gifted the world with the intriguing game of Polo. This valley has witnessed many bloody wars including the fierce battles of World War II. Imphal served as a seat for power, and the royal family here erected many forts to strengthen their position. One of the most beautiful forts in the Northeastern part of India, the Kangla Fort, is situated near Imphal.

Surrounded by the Naga Hills on all sides, Imphal is a confluence of arts, culture and great food. This laidback state capital of Manipur is mainly inhabited by the Vashnavites and the people here have a simple way of life. Any Manipur tourism itinerary usually starts with this city and then moves to the other report parts of the state. And Imphal intrigues the travel enthusiasts with its unusual yet breathtaking beauty. There is so much of history and culture to witness at Imphal that your days will fleet past like hours!

Places to visit in Imphal 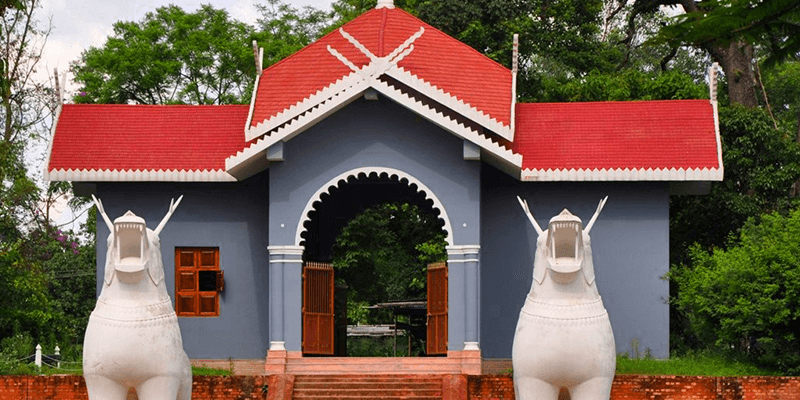 The Kingdom of Manipur once stretched as far as Myanmar and Kangla was always the seat of power for the royal families of Manipur. Kangla Fort, lying on the banks of Imphal River, has to be the first stop on your Manipur tourism itinerary. This grand fort and palace was built in 1611 by the rulers of Ningthouga dynasty. This formidable fortress has been a site of political and religious importance. During the British rule the fort was taken over by the armed forces, and remained with the Indian army after Independence. In 2004, the fort was opened to the general public.

Within the Kangla Fort one can come across Nungjen Ekon, a sacred pond, which has become an important pilgrimage destination for the Manipuris. The next important landmark within the fort is Uttra, which served as a coronation hall for the rulers of Manipur. Though the hall is presently in ruins, after the structure was destroyed in air raids during World War-II.

Just beside the Uttra, lies Kangla Sha or “sacred dragons”. These are two giant Dragon statues, which are believed to repel bad omen and protect the valley from evil. The erstwhile rulers would worship these statues in huge ceremonies during any special occasion. However, the ancient statues were blown to pieces after the British occupied this fort in 1891.

Within the Kangla Fort complex, you would find two huge boats displayed, these would transport the royal family members. There is also the Sree Govindjee temple, dedicated to Lord Krishna and Radha, within the ramparts.

Thought you had enough? There is still something to see! Do care to visit General Slim’s Cottage, which has been converted into a museum. The museum carries pictures and other items belonging to the royal family. It also tells the tourists about the history of Manipur.

BOOK A HOTEL IN GUWAHATI 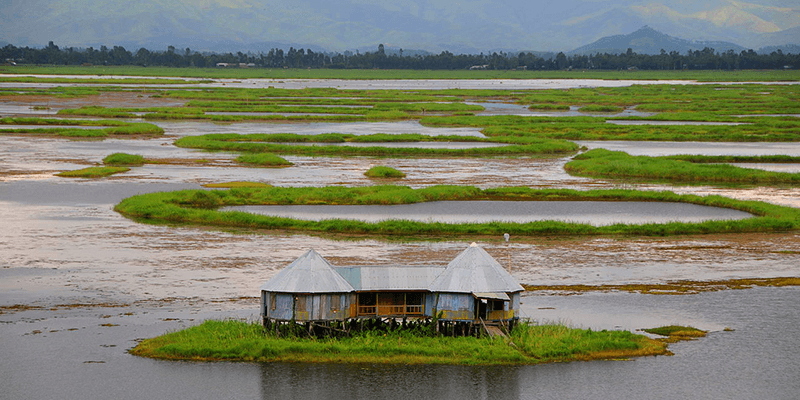 Loktak Lake is a serene and breathtakingly beautiful lake, situated in the Bishnupur district of Manipur (some 50 KM away from Imphal). Today this lake is recognized as India’s largest fresh water body. This unique lake surrounded by mountains has many small floating islands, known as Phumdis, which are made of Algae. These islands are so strong and sturdy that small villages have developed on these. Loktak Lake is a prime source of water to the state and during the monsoons this lake swells up forcing the inhabitants of the villages alongside to leave their homes and settled on the main land. Loktak Lake is also a heaven for the bird watchers. More than 50 known species of birds (including many migratory birds from the Himalayas) visit this lake every year. The lake turns into a bird sanctuary during the winter months. Loktak Lake is also known to produce the largest yield of organic fish, which includes exotic Carps and Anabas. During the months between December and January, the shores of Loktak Lake become angling paradise. 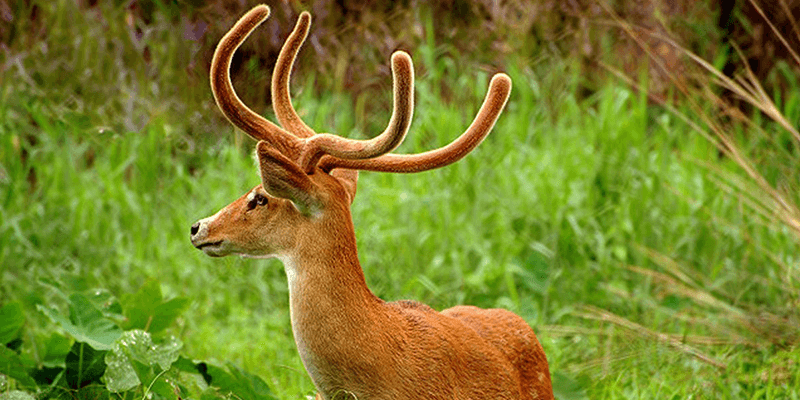 You might have visited many national parks, but none like Keibul Lamjao National Park. It is the only floating national park in the world! Situated adjacent to the Loktak Lake, Keibul Lamjao houses many rare species of animals such as Brow-antlered Deer, Eld’s deer, Hoolock Gibbons, Stump-tailed Macaque and Indian wild bears. Spread across an area of 40 sq. km., Keibul Lamjao is a rich amalgamation of aquatic, wetland and terrestrial ecosystems. The national park is an adventure lover’s delight, as there are many trekking trails available here which bring you close to the rare ecosystem existing here. Keibul Lamjao National Park is also an ideal place to sit and view rare birds. It is home to birds like Burmese Pied Myna, North Indian black Drongos, Jungle Crow, Yellow Headed Wagtail, Ruddy Shell Duck, Hooded Crane and Crimson-breasted Pied Woodpecker. There are tall watching towers erected to aid in watching the animals and birds. 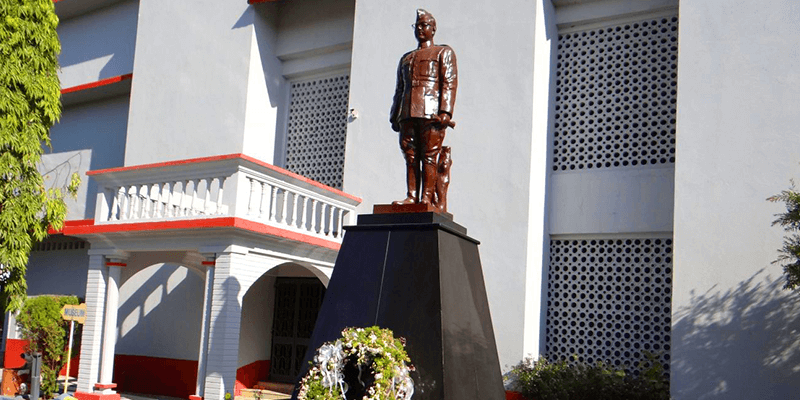 The Indian National Army (INA) Memorial at Moirang is situated over a historic place. It was here, in April 1944, that an INA unit led by Colonel S. A. Malik first hoisted the tricolor of independent India! The memorial is dedicated to the fallen soldiers of Netaji Subhash Chandra Bose’s INA, who fought valiantly against the British and many other odds. There is a museum where the uniforms and other war time relics of INA have been preserved. There is also a section which shows how Bose and his army were instrumental in fighting for India’s freedom. 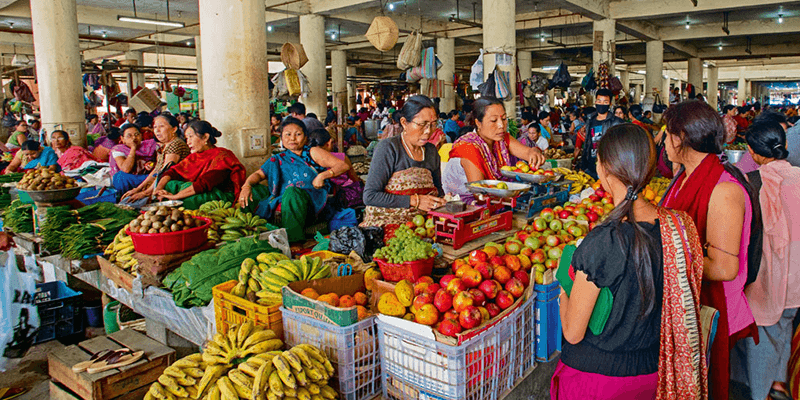 Once in Imphal, visiting the Ima Market is a must. Situated bang in the center of the city, Ima Market is an all-women’s market. All the shops are run by women only! Ima Keithel market is the lifeline of Imphal and you get everything here. From fruits and vegetables to stylish clothes. But the biggest draw of this market are the traditional Manipuri attires and handicraft items. You can also purchase many handcrafted items here.

A trip to Imphal allows you to explore some of the unique beauties of India. It is a city that you must definitely have on your travel bucket-list.