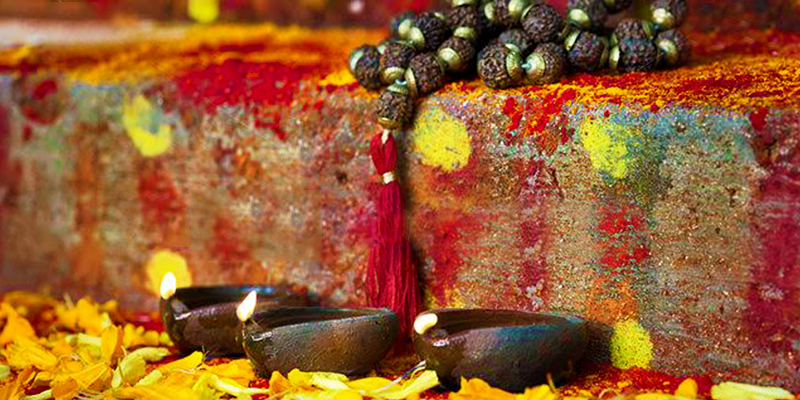 They say that spirituality is a step-by-step journey. You have to be willing to sacrifice certain comforts and walk long paths to get peace. As you walk with devotion, you will master the art of overcoming physical pain and meet many inspiring devotees along the way. Expecting miracles along the way, the devotees overcome the physical challenges. Known as Padyatras or walks towards temples, these have become a regular feature for many religious places in Southern India. As a tribute to the faith of lakhs who undertake such pilgrimages, today we explore the popular padayatra destinations in this state. 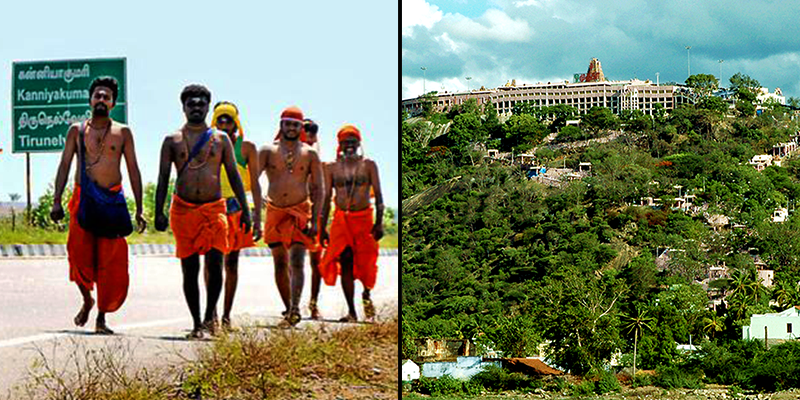 It is one among the six homes of Lord Muruga. The Murugan temple on top of the Palani hill is a major pilgrim centre in South India, attracting devotees from all over the world. Palani is also known for its association with the Sidhas. In fact the Lord Muruga idol at this temple was installed by one of the 18 Sidhas called Bhogar. Padayatra is one of the popular ways of worship in Palani and it is a ritual practised majorly by people of the Chettinad region in Tamil Nadu. Devotees from several Chettinad towns walk in small groups towards Palani, with the intent to attend occasions such as Thai Poosam and Panguni Uthram festivals. Walking 25 to 30 KM a day (sometimes walking for weeks together), carrying only the minimum essentials for the yatra with a rigorous discipline for mental and physical cleanliness, the devotees take an energy sapping journey of faith.

Get down at: Karaikudi (KKDI) 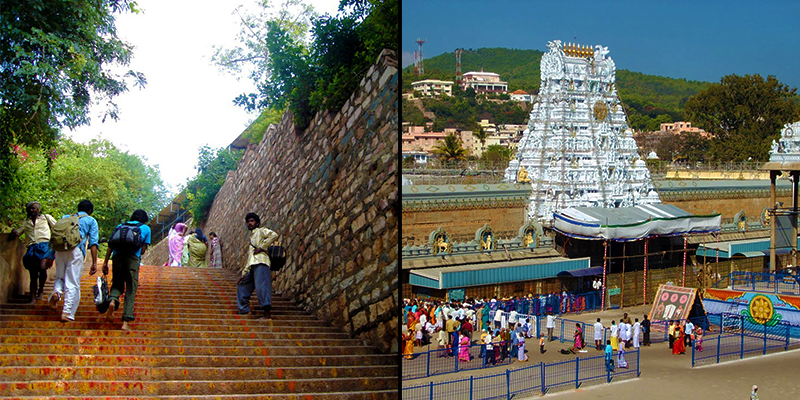 Tirupati is home to Lord Venkateshwara and is situated in Andhra Pradesh. It is probably one of the richest temples in India with the amount of donations and offerings it collects every day beating other temples by miles. A widespread belief among devotees is that a visit to Tirupathi will bring wealth and prosperity. The Thirumala temple is atop the hill and people walk by foot from the foothills to the temple every day. Several other pilgrims even walk from far-away places like Chennai, Vellore and Bengaluru in search of Lord Venkateshwara’s blessings.

Get down at: Tirupati (TPTY) 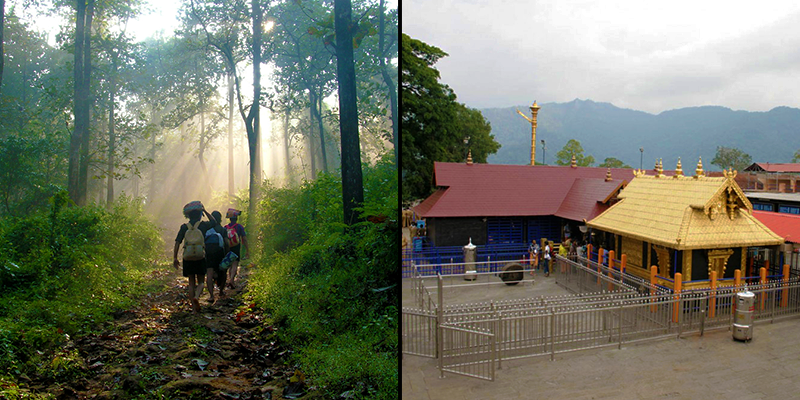 Sabarimala is one of the largest annual pilgrimages in the world with an estimated 100 million devotees every year. The Lord Ayyappan temple, situated in the hills, has a lot of unique rules and restrictions for pilgrims and it is a phenomenon to watch the devotees adopt the rigorous preparatory ritual for the pilgrimage. Devotees stop consuming meat, liquor and avoid wearing footwear among many other rituals during this period which is believed to cleanse their body and mind for the trip. There are three popular routes to the temple and each one is an arduous trek along the Western Ghats, which will test the will power and physical fitness of devotees.

Get down at: Chengannur (CNGR)

Judging by the list, do not conclude that Padayatra is only a Hindu thing. Here are three Christian pilgrimage centres where the Padayatra ritual is popular among the devotees. 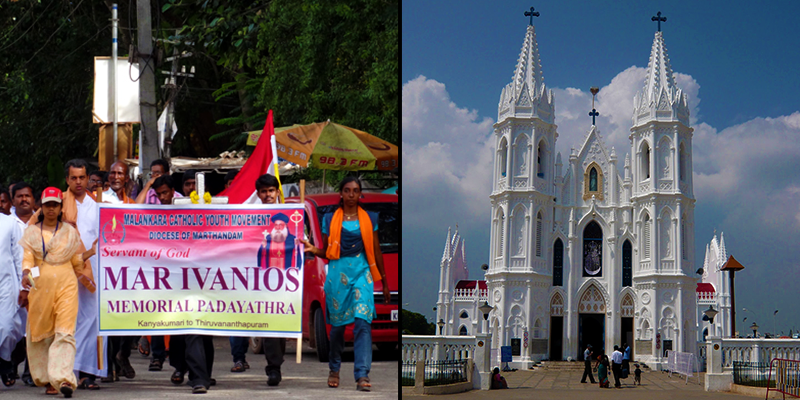 The Velankanni Church, the Our Lady of Good Health Basilica, built in the 16th century on the coastal town of Velankanni attracts thousands of pilgrims every day from across the world. The birthday celebrations of Velankanni Mary and flag hoisting on Church premises are the major annual events in this church. People walk to Velankanni from as far as Kanyakumari, which is the southernmost tip of India. The pilgrims carry the weight of their problems and illnesses to Mother Mary seeking relief and the almighty heals them and shows them the way.

Get down at: Kanyakumari (CAPE) 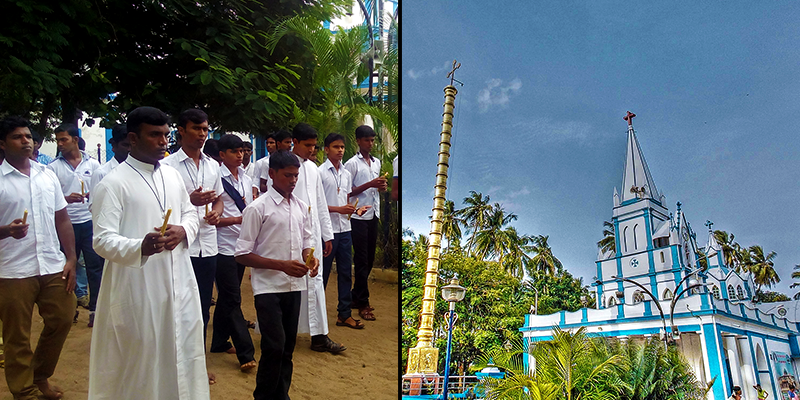 Villianur is a small coastal town, famous for its Our Lady of Lourdes Shrine, popularly called as the Villianur Madha Church. It is a Roman Catholic Shrine. In 1977 when a cyclone hit the east coast of Tamil Nadu, miraculously this town was saved from heavy damages and to owe their gratitude to Our Lady, the first pilgrimage on foot to the church began on October 10, 1977 from Pondicherry. It is also called the ‘Parihara Padayatra’

Get down at: Pondicherry (PDY) 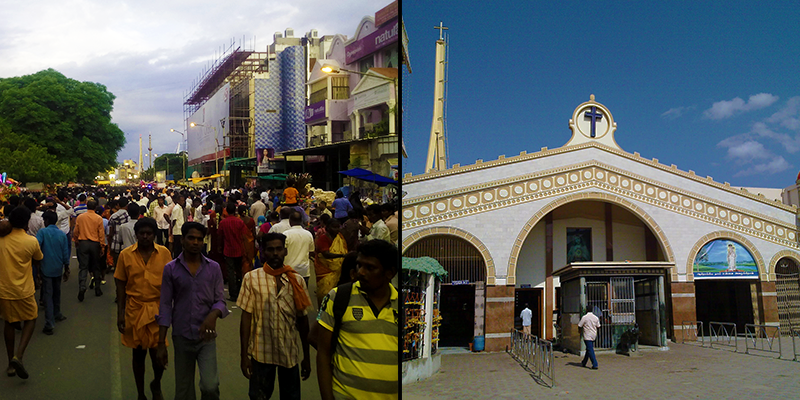 The Annai Velankanni Basilica church, also called as the Besant Nagar Madha church, celebrates an annual flag hoisting event from August 29 to September 4 in line with the Velankannai Church. Devotees of the church start to walk from this church to the Velankanni church every year. Numerous devotees take this Padayatra every year, almost bringing the city to a standstill with their numbers. This Padayatra clears their mind and body from the sins that they committed and gives in them the strength to lead a spiritually enriched life forever.

Get down at: Chennai Central (MAS)

ALSO READ: Tourist attractions around the Cauvery, Kashi of South