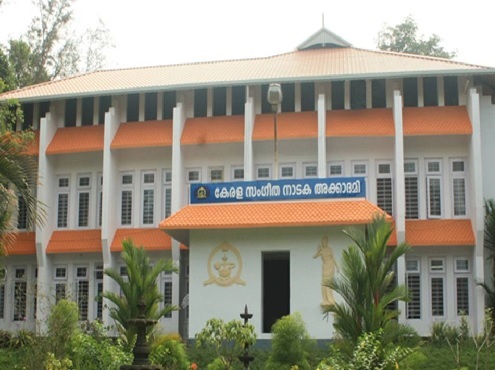 If you have not been to ITFoK, it’s time you did, as you stand to miss one of the most prestigious festivals of theatre, dance, and drama in the Asian sub-continent. Founded on 26 April 1958, the Kerala Sangeetha Nataka Academy promotes music, theatre, and Kerala’s related performing arts. The ITFoK or the International Theatre Festival of Kerala was first held in 2008 under the auspices of the Kerala Sangeetha Nataka Academy, an autonomous arm under the central department of culture, which originally floated this venture to support and nurture the development of diverse forms of music, dance, Kerala folk arts and theatre, and to document and preserve data on historically significant art forms for posterity. They also print rare and normally inaccessible books on drama, dance and music from Kerala. They have their own bi-monthly publication called the “Keli,” which also doubles as their mouthpiece. 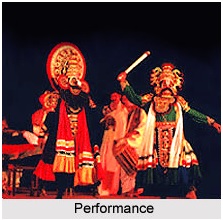 erful about the ITFoK is its multifaceted engagements that showcase not only the contemporary theatre, bur the diverse folk arts and traditional forms of theatre from not only Kerala, but the whole country and foreign countries as well, so that foreign groups visiting this festival, can get a taste of our culture as a whole, and also gain the opportunity of interacting with each other for mutual cultural benefits.

The festival, conducted by the Kerala Sangeetha Nataka Academy at its own premises opens with a tumultuous rendition of the Chandralekha Group’s contemporary dance form, the “Shirara”.The seven days of the festival will enthrall you with art forms from the Malayalam, theatre, the Indian theatre and the global stage, besides other theatre films, art forms of the traditional, and programs in music. The 8th ITFoK will also facilitate participation in the Director’s Round Table and activities like “Meet the Artists”

The seven days of the festival will enthral you with art forms from the Malayalam, theatre, the Indian theatre and the global stage, besides other theatre films, art forms of the traditional, and programmes in music. The 8th ITFoK will also facilitate participation in the Director’s Round Table and activities like “Meet the Artists”.

Active participation and support from the culturally renowned Sahithya Akademi, the Kerala Kalamandalam Academy and the Kerala Lalitkala Akademi prove invaluable in ensuring the success of this festival. In addition, in an effort to eulogize the event, groups of artists under the patronage of the Kerala Lalithakala Akademi motivated by the plays, draw and present images every day, The festival will have international participation in the form of entries from eleven countries that include Japan, Germany, Malaysia, France, Belgium, Turkey, Lebanon, Iraq and Iran. Among the four Malayalam plays for the festival are:

• ‘Khasakinte Ithihasam,’ a striking, theatrical rendition of Deepan Sivaraman’s adaptation of O.V. Vijayan’s classic, produced under the banner of the K.M.K Kala Samithi, originating from Kasargod district’s Thrikkarippur.
• “Mariyamma Natakam,” a first among a Malayalam social realistic play, directed by Sreenath Nair, based on the book by the same name, written by Polachirakkal Kocheeppan Tharakan in 1878, but published only in 1903, This will be the maiden staging of the historical play in Kerala.
• ‘Mathi’, produced for Malayala Kalanilayam Natakavedhi by director Jino Joseph
• “Addehavum Mrithadehavum” directed by Thrissur Gopalji, a solo performance

Lebanon, which dazzled the crowd with four plays by the Zoukak Theatre Company in the previous year, is back this year with three wonderful plays to capture your imagination. The three plays they intend to showcase this year are “Heavens,” The Battle Scene ‘and the “Silk Thread”.

The Panamai theatre from Chennai, dealing primarily with issues facing the transgendered, is all set to showcase a poignant rendition of: Colors of Trans” in this year’s festival. Other plays from Chennai and Pune will also grace the festival.
The ITFoK will open its online registration for passes on January 2, 2016, at 11 am, and the public can buy their tickets from the Akademi office counters from January 6th at 11 am. Those who have made online registrations will be issued their passes from January 8 at the Akademi office. Those who want to buy tickets at the respective venues will have to take their chance one hour before the performance.

The programme is given below: 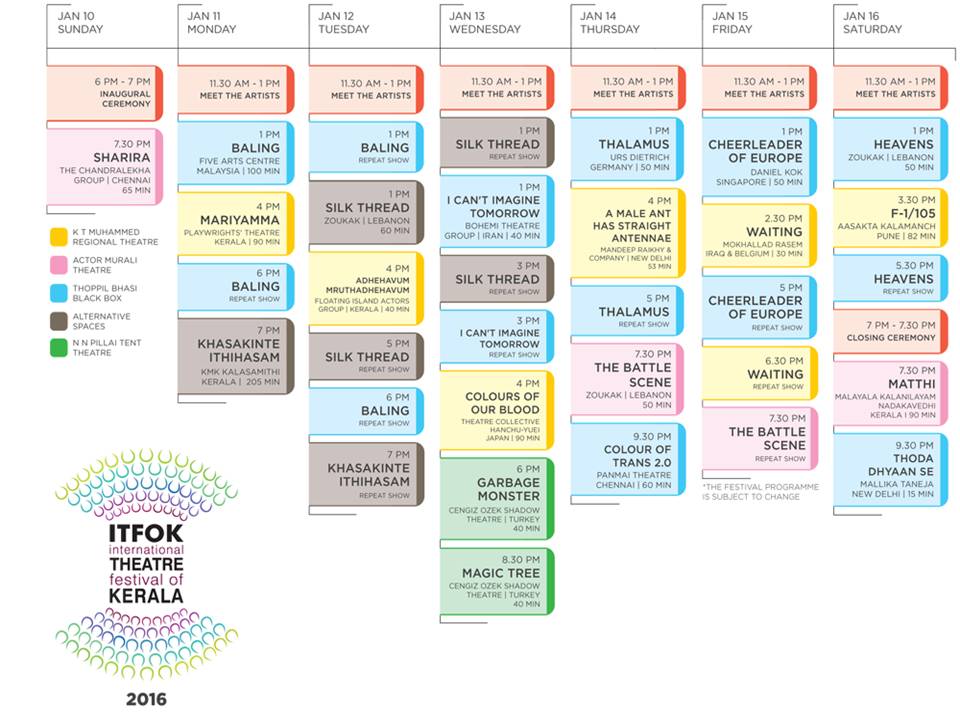 How to reach the venue?

All major trains from every direction pass Thrissur. So it is prudent to arrive at Thrissur by Rail, take a reasonably priced lodge near the railway station and travel to the Sangeetha Nataka Akademi by auto-rickshaw that will cost you about Rs. 30, one way.