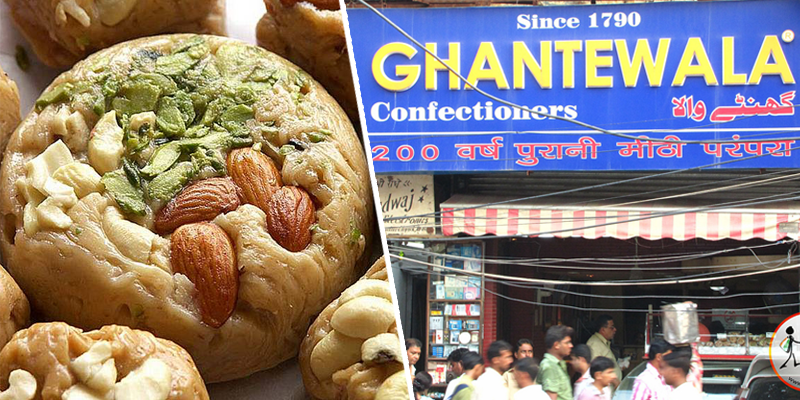 The evocative lanes and flavours of classic Puraani Dilli are exciting. It may not have a UNESCO Heritage tag, but that doesn’t deter from keeping alive the culinary legacy of this city. One amongst them was Ghantewala, the iconic sweet-shop of Chandni Chowk.

This sweet shop, which shut down recently this year, during 225 years of its existence has been a mute witness to many important events, both on the world stage and in India. Ghantewala had its roots back in 1790, when a small-time sweets maker, Lala Sukh Lal Jain from Rajasthan, migrated to Delhi to earn a living. It’s said he would make the most exotic sweet savouries, using only the finest ingredients. As the word spread and soon after he had gathered funds, he set up a shop on the bustling main street of Chandni Chowk. Widely known for his Sohan Halwa (made of refined flour, sugar, nuts and clarified butter), this was one out of many of his sweet establishments that had patrons from the emperor to the common man.

Ghantewala was not merely a sweet shop; it was an address, a destination. One amongst the several versions of why it was called Ghantewala has it that the Emperor’s favourite elephant used to ring the bell hanging outside the shop to be fed sweets or because the emperor could hear the school bells, near the shop, from the Red Fort. Ghantewala catered to the mutineers of 1857, who were mesmerised by the goodies it offered. Apart from this, Ghantewala had catered to Prime Ministers, Presidents, celebrities and numerous foreign tourists.

Having fallen prey to the globalisation of food, a pearl of the past has been taken away. Getting its shutters down has diminished the legacy of the city – a legacy one was, is and will be proud of. This leaf from the chapter of history might have come to an end, but its 200-year-old sweet reminiscences will be a never-ending reminder of its strong representation of India’s heritage and cultures.