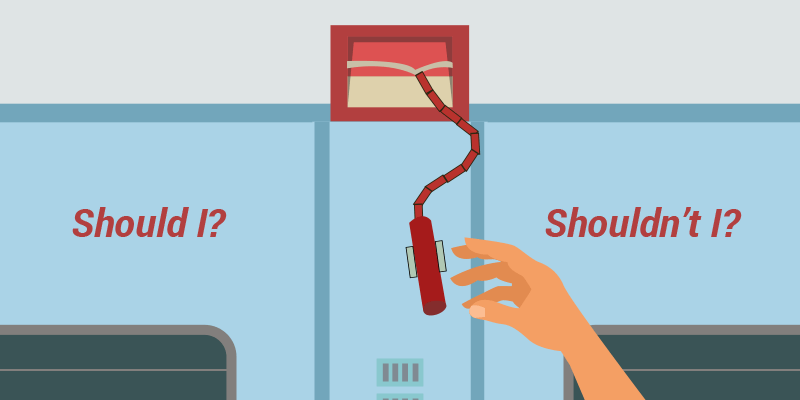 Emergencies may arise anytime during a train journey. And at such times you would dearly want to stop the train or draw attention towards the crisis. The code of practice for train travel emergencies is: to stop the train, pull the chain! With the guard and loco pilot rooms at the extreme ends of the train, it is improbable for the passengers to rush to those rooms seeking help during their emergencies. Keeping this in mind, each train coach comes equipped with Emergency (or Alarm) chains which, when pulled, can bring a moving train to a standstill. While each of you might be knowing about the emergency chains, you might not be knowing about various facts regarding chain pulling. In this blog we would try to clear all doubts regarding chain pulling.

How does the train stop when somebody pulls the chain?

The alarm chains are connected to the main brake pipe of a train. This brake pipe maintains a constant air pressure, helping the train move smoothly. When the emergency chain is pulled, the air stored in the brake pipe escapes, through a small vent. The drop in air pressure leads to the slowing down of the train. The loco pilot quickly notices this drop in the air pressure and starts maneuvering the train. As the train runs on narrow rails, so it cannot be brought to a sudden standstill, as that could lead to imbalance causing derailment.

NOTE: A train running at a speed of 110 km/hr might stop completely within 3-4 minutes of the chain being pulled.

How many Emergency chains are provided in coaches? 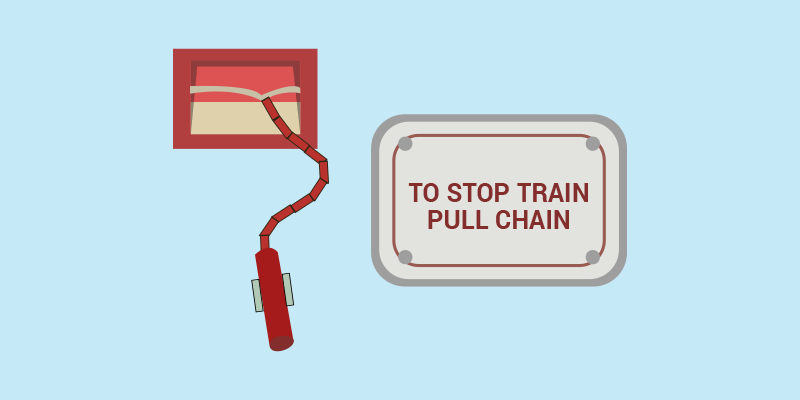 In the past, there used to be chains or either side of the coach walls (for ready use by the passengers). But, Indian railways has cut down on their numbers in the recent times (due to their misuse). Today, there is a single chain, mostly situated in the middle portion of every coach.

Can the loco pilot override the emergency braking system in train?

Yes, the loco pilot can override the emergency brake only in certain situations. There is a bit of history involved behind the overriding logic. In the olden days, when dacoits were a big threat, loco pilots were given clear instructions to override emergency brakes when passing through crime prone areas. But the rules have been changed somewhat today. If a present day loco pilot overrides the emergency braking system in train, then the person is answerable to the higher authorities for such an action.

How does the RPF know about who pulled the chain? 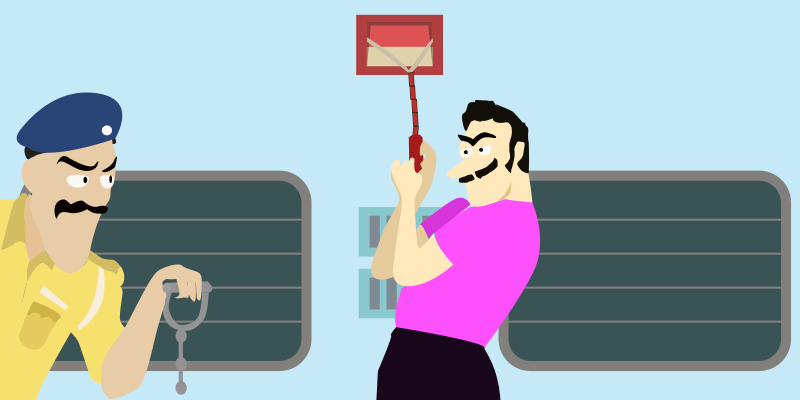 As soon as the alarm chain is pulled, the RPF personnel reach the coach within no time at all. This makes many wonder – how? Well, the train coaches are fitted with emergency flashers, situated on the side walls of the coaches. The flashers from the coach (in which the chain was pulled) are activated as soon as the emergency chain is pulled. A light also starts blinking and buzzing within the locomotive pilot’s controls until the Guard, Assistant Driver and RPF personnel reach the location of the chain pulling and are able to manually reset the chain. Once the chain is reset, the air pressure gradually comes back to normal and the train is ready to depart.

NOTE: While the emergency flashers can give away the coach where the chain pulling occurred, it cannot tell who pulled the chain. The RPF personnel can be seen questioning the passengers to know about the identity of chain puller.

What is the punishment for chain pulling?

Chain pulling, without valid reasons, is a punishable offence under Section 141 of the Indian Railways Act. According to 141 of Railways Act, if a passenger causes interference in the communication between the railway personnel in-charge of the train and the passengers, without any sufficient cause then the person would be held guilty. On being proven guilty the person shall be punishable with one year imprisonment or with a fine that may extend to INR 1,000.

NOTE: The minimum punishment when proven guilty must not be less than a fine of INR 500 (for the first offence) or imprisonment for three months (for second or subsequent) conviction.

Which is an acceptable condition to pull chain in train? 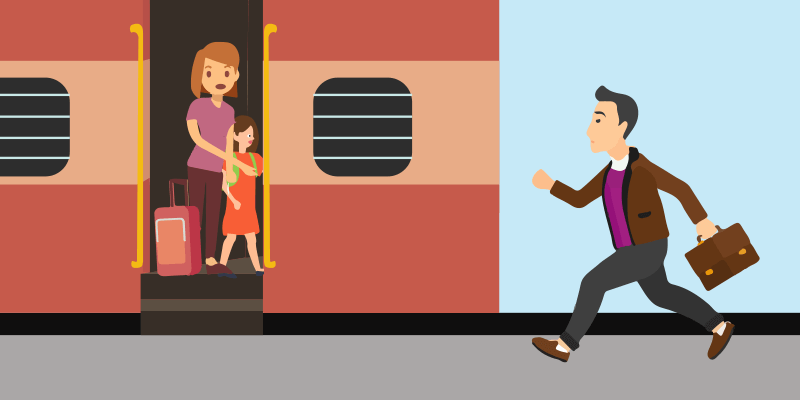 The emergency chain system was introduced to help out passengers during their emergencies. Some of the acceptable conditions to pull chain in train includes: a fellow passenger drops from the moving train, fire in the train, family member left behind at the station, boarding with an older or differently abled person at a station where the stoppage time is insufficient, medical emergencies (when a passenger within the coach needs urgent medical help), safety emergencies (events like robbery, dacoit raids, snatch-and-run, etc.). Other instances of emergencies can be held as valid reasons for chain pulling only after evaluation by the competent railway authorities.

NOTE: Pulling the chain to delay the departure of a train for a passenger who is yet not onboard is a punishable offence.

Can chain pulling lead to any physical damage on the train? 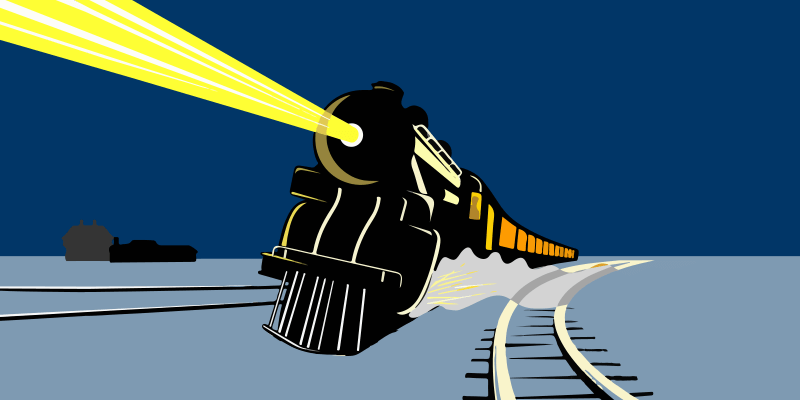 If the emergency chain is pulled while the train is in slow motion than there will be no damage caused to the train. While on the contrary, if the chain is pulled while the train is running at top speed then there is a high probability of train derailment. Furthermore, sudden halting of a train (due to chain pulling) can start a chain reaction. It not only delays the train you are onboard, but also delays the next trains travelling along the same line. 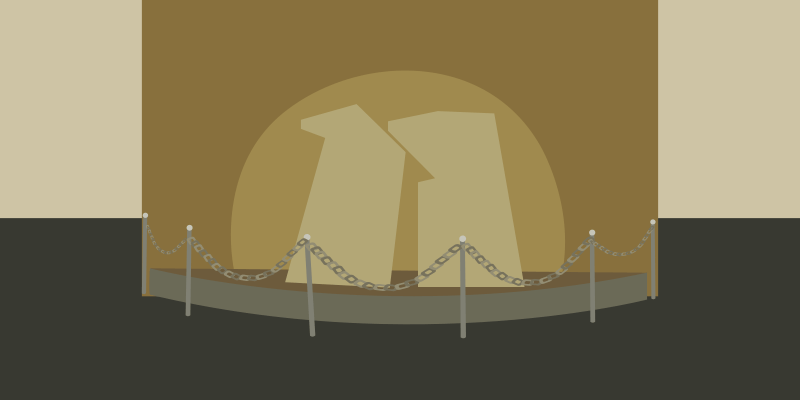 One of the biggest train accidents in the French railway history was caused by reckless train chain pulling. On June 27, 1988 a Gare de Lyon terminal bound commuter train crashed into another stationary train. In this accident 56 lives were lost. Just a few days prior to the accident there was a change in the time table of the train in question here. This meant that the train now did not have halts at some of the wayside stations. So, when the train was pulling away from one such wayside station, one passenger decided to pull the chain. As the train abruptly slowed down, this passenger leaped off the train. But the train could not control its momentum and crashed soon after. So, before you pull the chain, always think again for your act could prove costly for others!