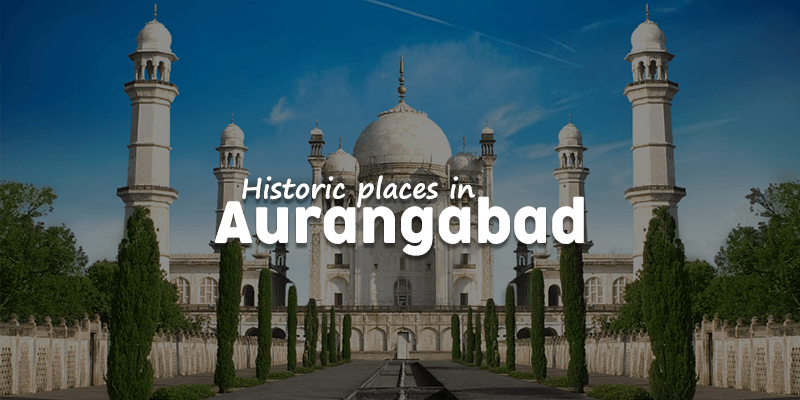 During the heydays of the Mughal reign, Aurangabad (in India) was considered to be one of the most strategically important cities. If you are a history buff, then Aurangabad is Maharastra’s answer to your travel cravings. This city has seen the ebb and tide of India’s history and the Aurangabad tourist places take you from Pre-Mughal period to the glory days of Mughal era and beyond. In the early 1600s the Prime Minister of Ahmadnagar kingdom, Malik Amber, established the town of Khadki. After Malik’s death, his son Fateh Khan changed the name of town to Fatehnagar. Then in 1653, the Mughal Prince Aurangzeb successfully captured the Deccan province. And, as a Viceroy of the area, he named Fatehnagar as his capital. Soon after, now a populous city, was renamed as Aurangabad. The city was used as a strategic stronghold by the Mughals in their fight against the Marathas, led by Shivaji. As you can well fathom there is a lot of history all around the places to visit in Aurangabad.

In the recent past, Aurangabad has remained largely overshadowed by the glare and flair of its renowned neighbors such as Mumbai, Pune, Shirdi etc. But for a history buff, places to visit in Aurangabad are as good as taking a tour of Agra or Delhi. With that thought in mind, let us take a tour through some of the must visit Aurangabad tourist places.

6 Must visit places in Aurangabad 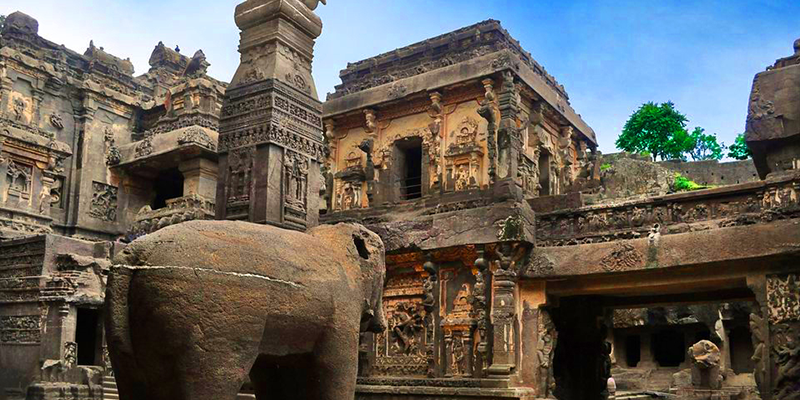 Before the Islamic rulers held their sway over Aurangabad, it was a prominent Buddhist settlement. And the Ajanta Caves, dating from 2 BC, are great memorabilia of this fact. Ajanta Caves are a complex of 30 Buddhist caves. Today, these caves are designated as a UNESCO Heritage site and contains many fine masterpieces of Buddhist religious art. The wall paintings at the caves depict the past lives and rebirths of Buddha and carry rock-cut sculptures of Buddhist deities. Ajanta Caves are situated on rocky cliffs at the side of a U-shaped gorge by the small river of Waghur. There are many beautiful waterfalls in the close vicinity. 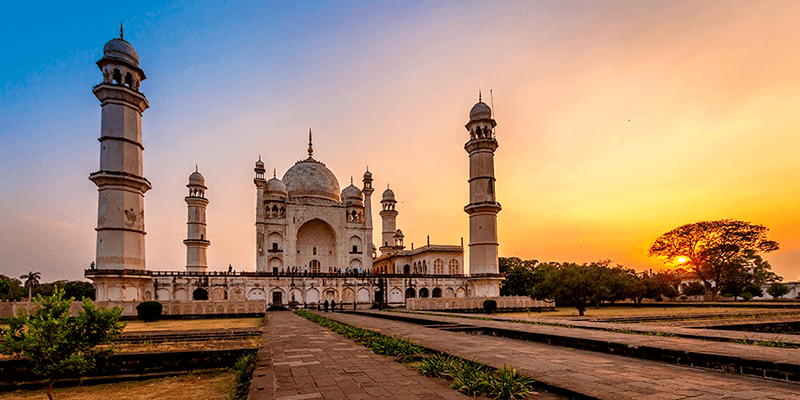 Simply speaking: this is a miniature version of the world renowned Taj Mahal. Just like Taj Mahal, this is also a symbol of love. This striking monument was constructed some time from 1651-1661 by Emperor Aurangzeb and is dedicated to his wife Dilras Banu Begum. Dilras Begum was the first wife of Aurangzeb and she passed away in 1657 due to post-delivery complications. After the death of his beloved wife, the emperor commissioned the construction of lavish Bibi ka Maqbara (meaning Tomb of the Lady). Identical to the Taj, this monument is beautified by 4 minarets on 4 corners. Built on an elevated platform, one can enter the monument from three sides. The interiors of Bibi ka Maqbara are glorified with fine carvings, gorgeous designs and rare marbles. 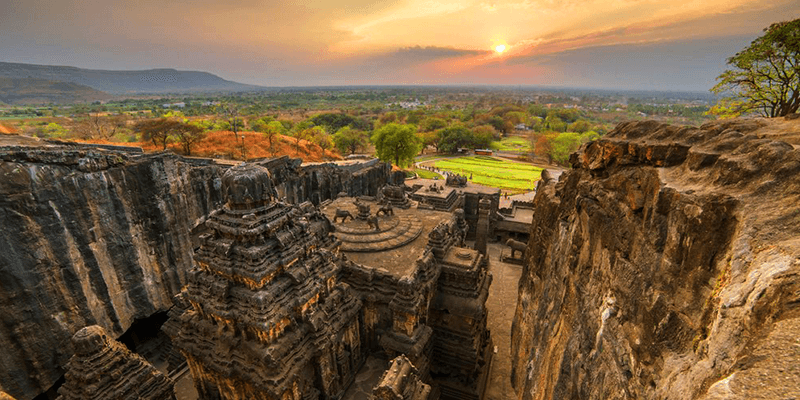 A bit younger than Ajanta Caves, and more scattered, are the Ellora Caves. Built during the late 5-10 centuries, these caves represent various religions (Buddhism, Jainism and Hinduism). Ellora Caves are considered to be one of the “largest rock-cut monastery-temple cave complexes in the world”. This ancient complex is also a UNESCO World Heritage Site. The caves in Ellora are multi-levelled and each level has its own story. There are a total of 34 caves in the Ellora complex, and out of these Cave 1, 2 and 16 are a definite visit. While Cave 1 contains a Buddhist Vihara and 8 monastic cells, Cave 2 has 12 intricately carved pillars and a carving of Lord Buddha seated on a lion. The doorway also features many beautiful Buddhist carvings. Cave 16 is the highlight of Ellora Caves and contains largest single monolithic rock excavation in the world. It has the Kailash Temple containing the chariot shaped monument of Lord Shiva. 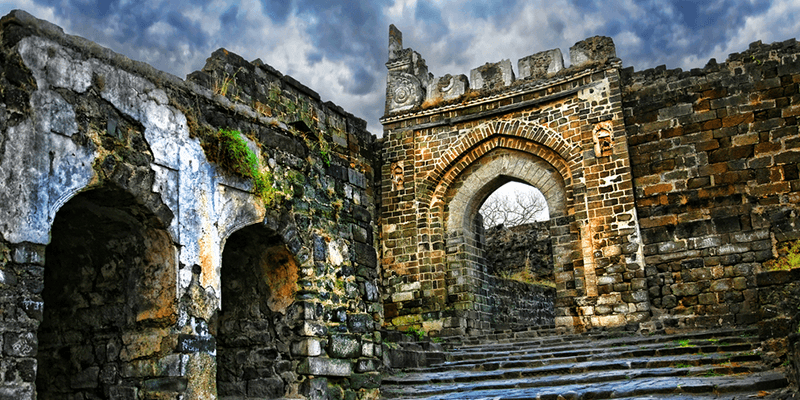 Just 11 KM away from Aurangabad lies the majestic Daulatabad Fort. Situated 200M above sea level, there is a lot of history centering around this fort. Daulatabad was a small and insignificant city along the caravan route in the sixth century. Then in 1187, Yadava king Bhillama V built the first fort at the exact site. Daulatabad got a real facelift when during the reign of Muhammad bin Tughluq, it was named the capital of the country. The population of Delhi is known to have been shifted to Daulatabad at a short notice to meet the demands of Muhammad bin Tughluq. But after a short stay, the emperor again shifted his base back to Delhi, leaving Daulatabad as forlorn as it once was. But the Daulatabad Fort is a striking monument from those times. Today, the fort is hailed as one of the tourist wonders of Maharastra. A hike up to the ramparts of this fort offers panoramic views of the entire city. Situated on a hill, Daulatabad Fort was not only impregnable but it also has great samples of exquisite architecture. 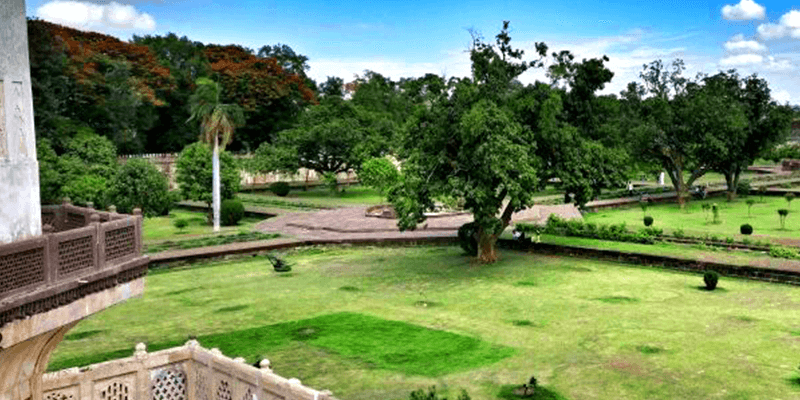 If you want to spend some time admiring the greenery of Aurangabad, then the best place to visit would be the lush gardens of Himayat Bagh. As the history of this Mughal Garden goes, before its construction, the place was a marshland close to the living quarters of Aurangzeb. But the dampness of the marsh did not auger well for the health of Aurangzeb, so he had the marsh filled up and the reclaimed land was then used to build a lavish garden. The beautiful Himayat Bagh is spread across 300 acres and was built in 17th century. The park is decorated with various herbs, flowers and plants. Presently, the garden is used as a Fruit Research Station and Nursery. 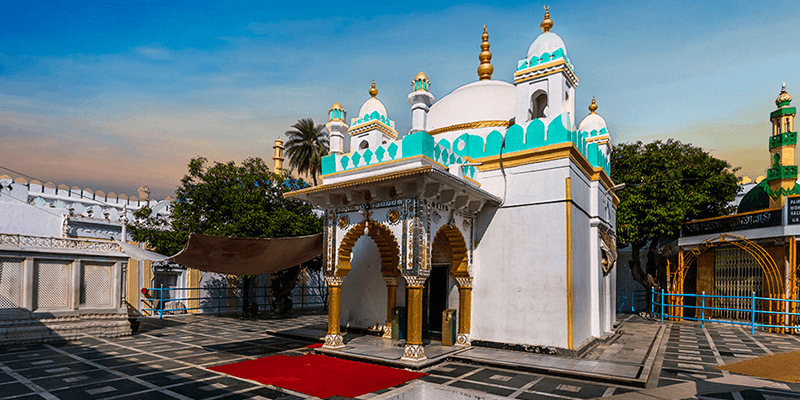 The landscape of Aurangabad has not only been beautified by the Buddhist monks and Mughal rulers, there was a Saint who deserves some credit as well. Yes, we are talking about Zainuddin Shirazi, who was a saint of the Chishti order. Zainuddin devoted his life to the well-being of Aurangabad dwellers. So, shortly after the death of this saint, a grand mausoleum was erected in his honor. What is also significant about this monument is that: towards the West of Zainuddin Shirzai’s Maqbara lies the Tomb of Aurangzeb. There are other tombs of other royal family members in close vicinity.

As you would find, there is plenty to keep you busy and entertained while touring Aurangabad. So, when are you visiting this beautiful city?