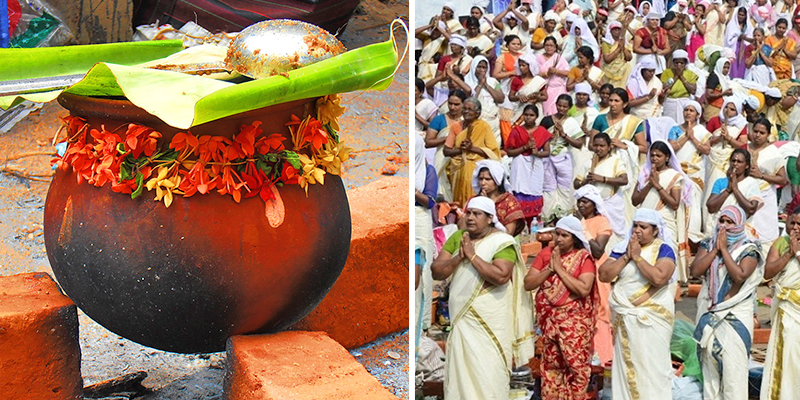 When Thiruvananthapuram is all drowned in the devotional dip of Attukal Pongala, the first thing you greet within the city is the devotional songs coming up from seemingly everywhere: from the taxi stands, from shop fronts, from resident association offices and even from cricket clubs.  The streets are neatly decorated with coconut leaves. Flex boards are everywhere, welcoming the devotees or portraying the goddess in various avatars.

Attukal BhagavathiTemple, for all its snowballing fame, is a small temple about 4 km from Thiruvananthapuram railway station. The temple, owned and run by a family called Mulla Veettil, attracts a steady stream of devotees throughout the year. On the Pongala Day every year, it eclipses everything else in the capital city and the whole city becomes the temple’s courtyard.

On this festival, women come from all parts of the state – even from across the globe, considering the strong presence of non-resident Keralites in the ritual and all walks of life.  With the women restriction in Sabarimala, Attukal Devi temple is seen as the perfect complementary and is hence called “Women’s Sabarimala”. Attukal Pongala is supposedly the largest religious gathering of women in Asia, or even in the whole world.

Attukal BhagavathiTemple temple is centuries old. According to the legend, one of the ancestors of the Mulla Veettil family had a dream in which the goddess appeared and asked him to build a temple at the particular location in which the temple is situated now. Another myth associated with the temple is Kannaki, the Tamil mythological figure who burnt the entire city of Madurai in anger against the Pandya king who had killed her husband and set out to Kodungalloor in Kerala. It is believed that Kannaki stayed in Attukal temple en route Kodungaloor. It was during the brief sojourn here that her cosmic rage got subdued, as the myth says.

The temple may not have the magnificence of Sree Padmanabha Swami Temple, which hosts the iconic deity of Thiruvananthapuram. Still, for the devotees, Attukal Devi is powerful and compassionate. She hears their woes, sorrows and wishes and helps them get what they want – sooner or later.

Pongala in Malayalam literally means ‘boiling over’. It refers to the act of making payasam or some other sweets as the god’s offering.  Though Pongala is offered in almost all temples, but none is as grandiose as Attukal Pongala is.

Pongala is conducted in open air. Preparing the fire place, three stones (three blocks of bricks) are placed at a convenient location. Dried wood or dried parts of coconut leaves are used for making fire and a pot is placed over the fireplace in which payasam and other sweets are prepared.

A culmination of 10 day-long festivities in the temple, Attukal Pongala is held on the 10th day.  Interestingly, one has to go to the temple a couple of days in advance and stay there to ‘book’ a fireplace in the temple premises. Only the most die-hard of the devotees manage to get that. The rest of them have to satisfy with a comfortable point on the streets of Thiruvananthapuram city – in front of houses, shops, government offices or even at bus stops.

On the festival morning, the city streets are filled with fireplaces and bricks. The devotees bring the ingredients for making the offering. Pongala is prepared out of rice, coconut gratings, jaggery, sugar, banana, dry grapes, ashew nuts, honey, ghee, and cardamom. The Pongala starts from the time when the first fireplace is lighted by the temple priest. Smoke fills the city air. There are celebrities in the Pongala and there are ordinary women. There are the young and the old. There are even some foreigners offering the Pongala.

Everybody makes payasam. Some make multiple types of payasam. Some also make appams (cakes) using different types of leaves. The Pongala will conclude sometime in the afternoon when the priest comes. And finally, devotees fold their hands and offer what they have made to the god in the ecstatic culmination of the ritual.

Devikulam –A destination when your nerves need rest

Monsoon Spa for elephants – A continuing legacy in Kerala