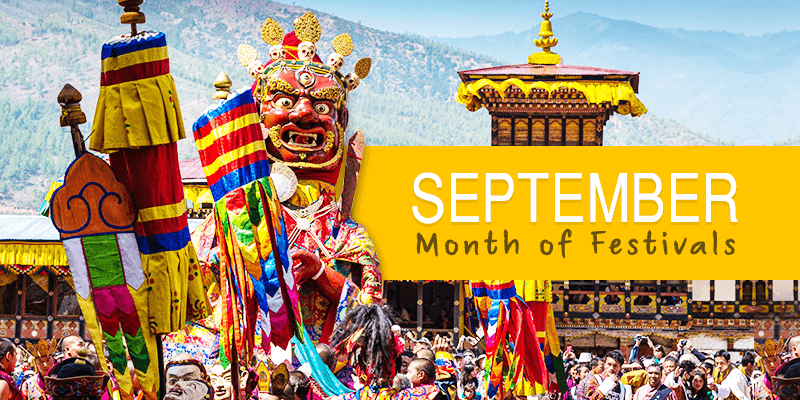 In a country so rich in culture and traditions, every festival celebrated here is a sight to behold. And when talking about India’s many festivals, what comes to mind is poet Rabindranath Tagore’s famous lines, “You are invited to the festival of this world and your life is blessed”.

So here we are again with a list of some of those interesting festivals & events in September, that you just can’t afford to miss. 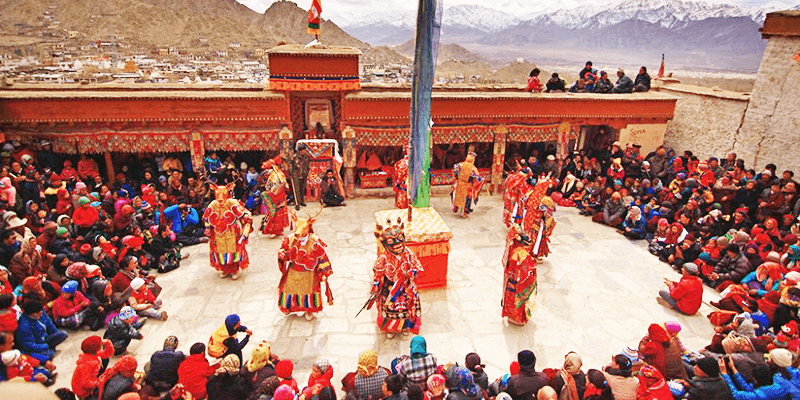 Ladakh Festival lets you immerse in the festive ambience which is full of immense warmth and joy. A call for over hundreds of spectators from across the globe, the highlight of this fest is its myriad colours, right from the wild lion and yak dancing, music presentations, craft exhibitions to yummy dining and tasting intoxicating barley beer known as Chang.

The festival starts with a long procession where the spotlight is on several cultural troupes and village contigents(local leaders, school kids and dancers), who perform assorted dances on the conventional tunes played by the orchestra. This traditional fiesta promotes the region’s centuries-old performing arts. Come here to purify your soul as a traveller by locking yourself in this week-long extravaganza. 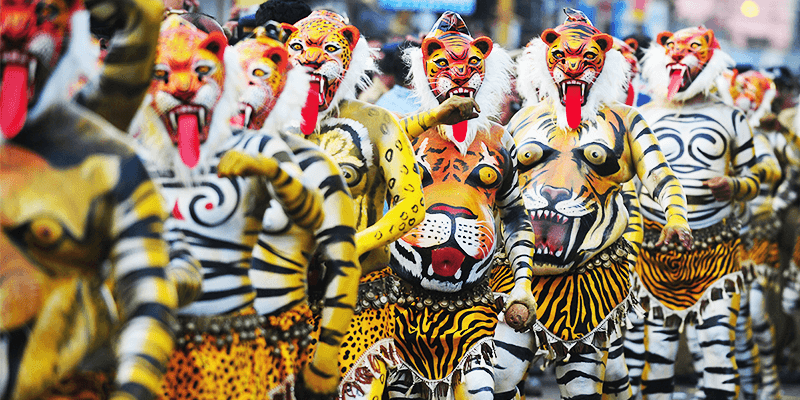 Pulikalli is an event that has become synonymous with Onam festivities. Pulikalli Tiger Play is a traditional theatrical form of dance that is performed on the streets of Kerala at the 4th day of Onam. Pulikalli means ‘Tiger’ and its play exhibits the hunting as well as the hide and seek activities of tigers from hunters.

The play takes place at Swaraj Ground at Thrissur in Kerala, every year. The performing tigers are not brought from forests or circus but are human-artists. Known as ‘Pulis’, these artists go through the task of painting their bodies in myriad patterns and colours resembling a tiger and also dance on the tunes of Kerala’s folk music. This folk dance and play is all about celebrating the brave and fighting spirit. The participants also flaunt their artificial bouncing tummies to add mirth to their ‘wild antics’. A feast for the eyes, people throng from far-flung areas to witness this riot of colours, inter-played with tenuous relationship between the man and the beast. 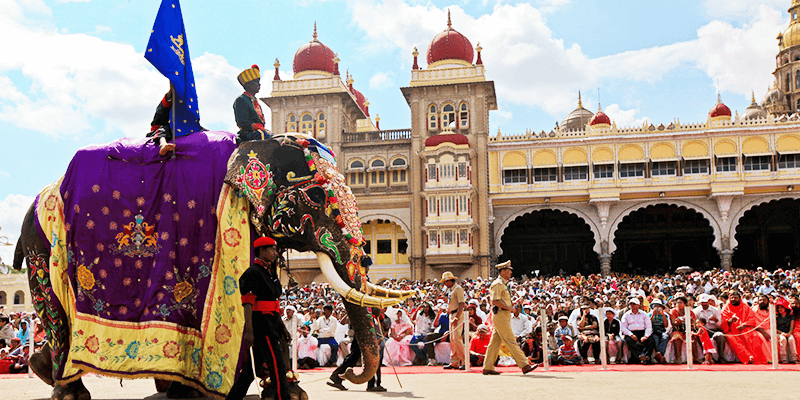 Dasara is the most extravagant festival which sees the entire city lighting up and coming alive. The Dasara festivities have become an integral part of the culture and life in Mysore and the main attraction of the 10-day Mysuru Dasara festival is its palace which is illuminated daily with nearly 1,00,000 light bulbs from 7 pm to 10 pm on all days of the festival. Mysuru Palace is the official residence of the royal family of Mysuru – the Wodeyar family.

When it is Dasara time, this otherwise peaceful city erupts into life and every corner is bustling with activity. Various cultural programmes highlighting the dance, music and traditions of Karnataka, are performed. Amidst fireworks, folk dances and doll shows, you can also enjoy a spectacular torch light parade, laser show and a food and film festival. Some of the other attractions include the Dasara Exhibition. Travellers from all over the world flock to the city to be part of the exquisite celebrations. 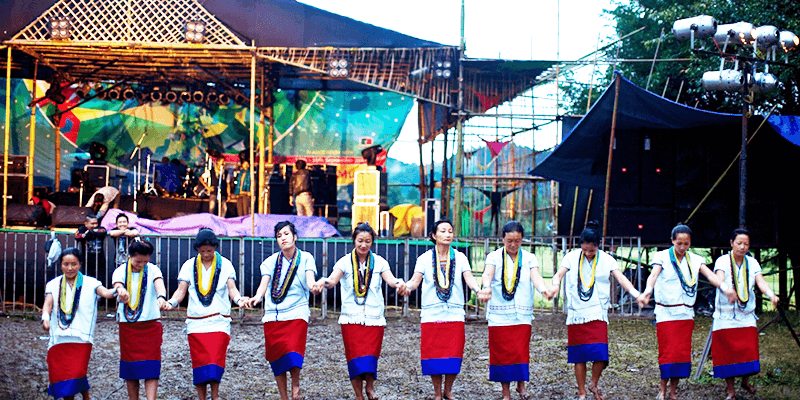 Started in 2012, Ziro Valley Music Festival is one of the most awaited and most-sought after music festivals of the country which receives tourists not only from India but many other countries.

The sleepy town of Ziro(in Arunachal) comes to limelight once a year during the Ziro Valley Music Festival. More than 35 Indian and international acts are performed. Besides, this music fest is also a big platform for several Northeast-Indian performers to showcase their talent. This year the 6th edition of this much-acclaimed music fest is scheduled to be held between September September 28 – October 1. 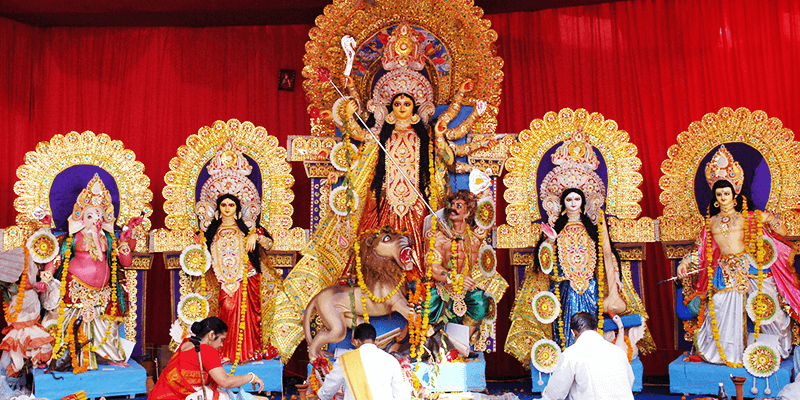 Navratri, the festival of nine nights is celebrated in a grand manner through out the country, especially in places like Gujarat, Bengal, and other parts of North India. The festival is dedicated to Goddess Durga and her various forms. People celebrate the festival by visiting temples, keeping fasts, playing Dandiya and offering pujas at Mother’s feet.

While in Bengal(especially Kolkata), big idols of Mother Durga are placed in beautifully decorated pandals, in Gujarat these 9 nights are dedicated to the extravagant Dandiya affair. Special arrangements for pujas and vrats are arranged at temples to mark theses nine days as a true symbol of adoration towards the divine mother and symbol of Power- Mata Durga.
Where: 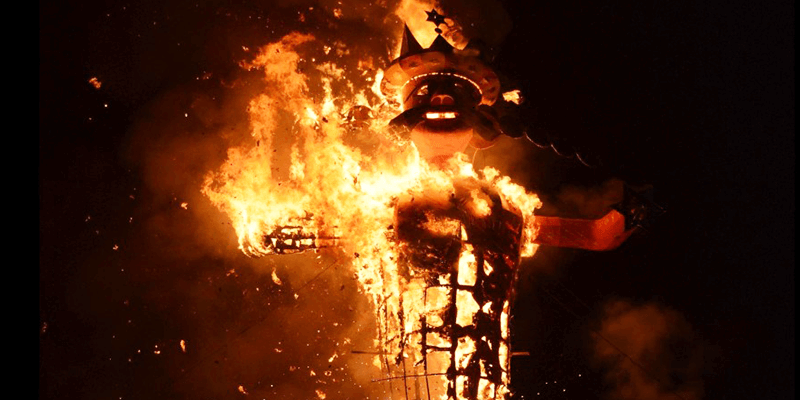 It’s that time of the year again – good is going to destroy evil – and you must not miss the festivities across the country! Read on to get an idea of how various communities around India celebrate Dussehra. From the larger than life Dussehra celebrations in Kullu and Mysuru to the long-held carnivals and burning Ravana effigies in northern parts of India, Dussehra is sure-shortedly one such pompous event that cannot be missed.

All marked and checked? Now, it’s time to travel and soak in the festivity fervour at these events.

Let’s Dandiya: Check out the top Garba venues in Gujarat