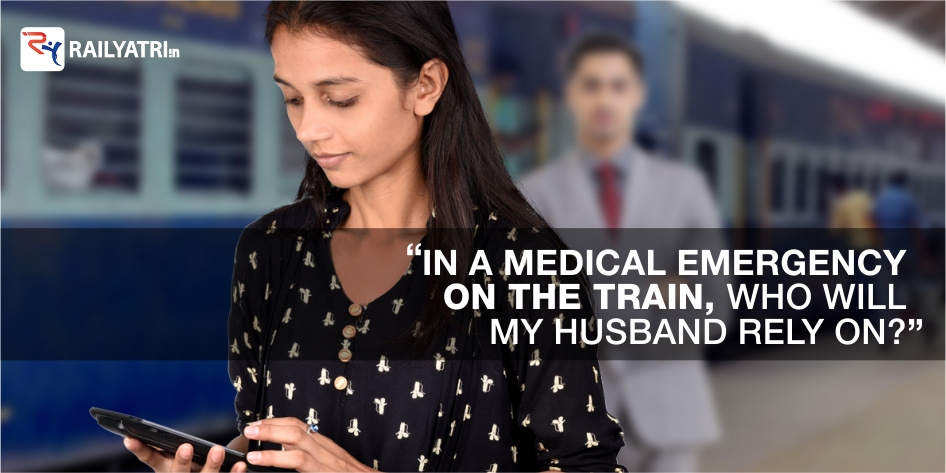 RailYatri’s new Medical Emergency feature helps the loved ones sitting back at home take charge of the treatment process in the event of a passenger’s sudden health deterioration. In normal instances, when a person falls sick in a moving train all the family members can do is pray! With the medical emergency feature, the family members (aka husband or wife) can just put in the train number and search for quality healthcare facilities in the upcoming stations. They can get in touch with these healthcare institutions and arrange for emergency care. This is the power that RailYatri’s all new Medical Emergency feature provides to users.

To elaborate on the utility of having updated version of the RailYatri app with the Medical Emergency feature let us now narrate an incident that occurred in the life of Rahul Prabhakar from Pune.

“I was travelling to Bangalore from Pune, my hometown. I had travelled to my hometown to witness my first baby’s birth. After a couple of weeks, when my leave was over I had to take leave of my wife and the newborn with a heavy heart.

I would also like to tell you that in the past I have had no medical issues, I claim myself to be 100% fit. So, when I took the train to Yesvantpur I could not even think of what would occur next. Road to the Pune railway station is long way from my home, and it was searing hot there. Apart from that, over the last few days the thought of having to leave my bundle of joy (my little princess) was weighing heavily on my heart. However, when duty comes calling you have to go!

Within 2 hours after the train left Pune station I started feeling dizzy. The severity increased and my feet and hand grew cold. I remember, before collapsing I instructed my co-passenger (he looked a helpful chap) to call up my wife. Thankfully, he did so. I have to thank my wife for holding her nerves then. I had shared a Trip through the RailYatri app with her. So, she could track my train’s exact location quite quickly. What she did next was commendable.

She looked up for Medical facilities in the upcoming stations, and arranged for an ambulance pick-up two stations later. She called up on my mobile and instructed the co-passenger (Mr. Navin) to ask the attendant to halt the train at the decided station. It was done and I was rushed to a reputable hospital.

After some treatment, it was detected that I had suffered a heat stroke along with fluctuating low pressure. It was nothing serious, but could have been much worse had I not reached the hospital so quickly.

I have to thank my wife for her quick thinking and the RailYatri app which aided her every step of the way. Thank god she was using the updated RailYatri app with Medical Emergency feature in it.”

Care for your Parents Health while on Train