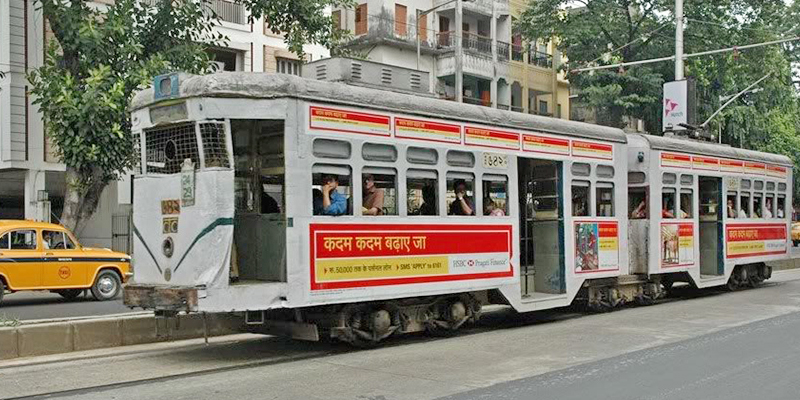 Culture and Kolkata are synonymous. The city has produced poets, writers, dancers, musicians, artists and film-makers through generations. Besides all of them, Trams have been Kolkata’s (earlier Calcutta) age-old tradition. Having nurtured the rich heritage of this city, trams in Kolkata bear testimony to that old culture that may have been heavily caked with the dust of industrialisation.

The history of trams which is one of the cleanest and most environment-friendly modes of transport is back to the times of 1873 when the trams were carried by the horses. After a seven years halt, the services resumed again in 1882 with trams running on steam locomotives. And  two decades later, a revolution came with the induction of electricity driven tram after in 1902. The trams, as a concept of travel, held its own prestige and retained its pride. This culturally enriched tram service, a pollution free public transport mode is managed by CTC (Calcutta Tramways Company Limited).

In this fast –pacing era, where the city has ample means of transport such as metros, buses and taxis, trams today are now more of a heritage saviour rather than a mode of public transport. One can only find trams running on selective routes which still has the reflection of Old Kolkata. But there is something really charming about the trams that have the capability to take you to an entirely different era. They are more for the tourist attractions chasing and experiencing the beauty by cutting across through the heart of the city.

Today, modern day trams are an outcome of the development of technology and design and the city was just blessed last year with the air conditioned versions of the same and digital signboards that run in city’s selected corners. One thinks of Kolkata and invariably conjures images of trams weaving its way through the length and breadth of the city. Trams in Kolkata symbolize an era gone by, a time when things were more relaxed and laid back. And yes, it still keeps to its tradition of being hassle free, not pushed around on the roads by traffic.

The City of Joy also holds the pride in being the only one that still runs trams in India and also are the oldest operating electric trams in Asia.

Trams are nice; they are quaint but still could not be kept aloof from the shackles of criticism which questions its existence in modern infrastructure developments in the city. Being a cause of traffic congestion, they also run on lesser frequencies during peak hours.

Though the slowness of heritage and rapidness of modernity is a hard thing to amalgamate, but it is also a fact that the valued legacy of history cannot be experienced in a blaze, it needs the charm of slowness to soak its flavour!