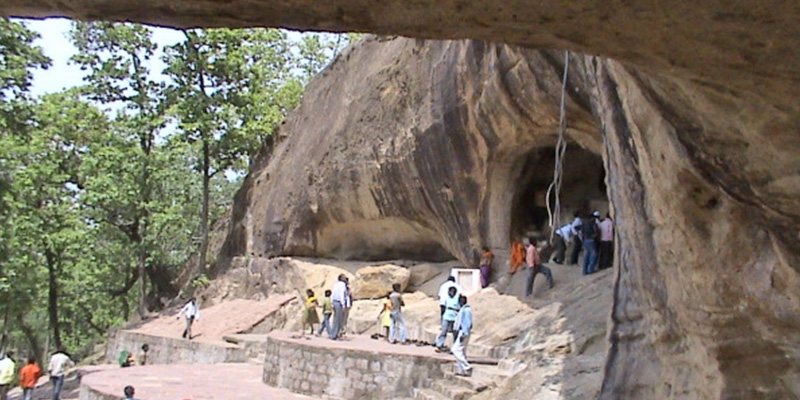 Though the separate state of Chhattisgarh became a reality on 1st November 2000, but the rich history of Chhattisgarh goes back to tens of thousands of years ago. And the one valued gem from the history of this state is – Sita benga caves which are a miracle in itself by all Indian standards. Together with Jogimara caves, it forms a 2,300 years old performance stage and one of the oldest theatres of the world.

These earlier caves are situated on the Ramgarh hills near Ambikapur in Surguja district of Chhattisgarh. This beautiful and secluded site was known to Europeans since 1875. Although it is a remote place now, but it wasn’t so silent some 2,300 years back. According to the legend, these caves hid Lord Rama, Sita and Laxmana and hence known as Sitabenga – ‘Residence of Sita’. The Sita benga caves are actually a tiny hall with the stage carved on the hill outside. The semi-circular valley with both caves in the background formed a fine amphitheatre which looks like more similar to ancient Greek theatres. With the capacity of some 50 seats, there are rock-cut benches arranged in terraces in the shape of a crescent.

The cave which is 14 m long, 5 m wide and 1.8 m high reflects beliefs that this place was popular during the spring nights with a full moon when the great festival of Kama (deity of love) took place. The human footprints, the two holes cut into the floor at the entrance, are a strong hold to speculations that many people and poets congregated there to celebrate festivals. Meanwhile, speculations also hold that ‘Meghdoot’ was written by Kalidasa here nearby.

Paintings and Inscriptions of Jogimara –
Jogimara caves which are relatively smaller than Sita benga caves are dry caves with a wide entrance. This small cave contains art of world importance – paintings and inscriptions. While the paintings reflect human figures of singers, dancers and unclear paintings of chariots, birds and animals, it also contains the first documented messages of love in the world between Sutnuka and Devdutta.

Reached via Hathipol tunnel (55m), these caves display a splendid air of mystery and provide a timeless saga of rich Indian history.

Travel Tip – Raigarh railway station should be your alighting point and from there you can take a taxi or bus to Sitabenga / Jogimara caves.