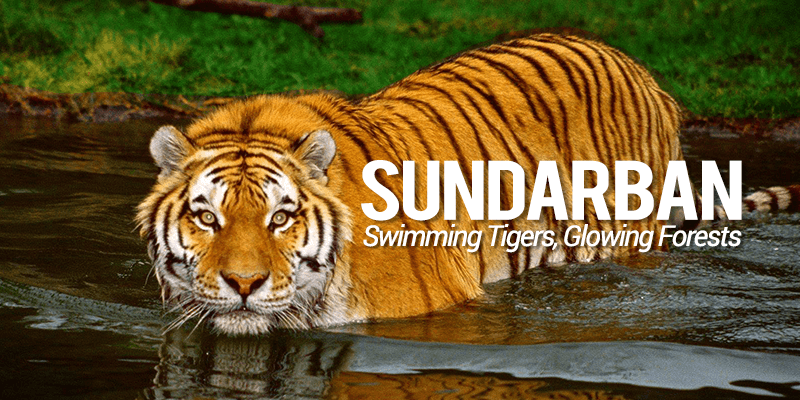 Situated 109 KM away from the busy metropolitan of Kolkata, Sundarbans national park is a must visit during the winters! Sundarban is the largest mangrove forest in the world and has been declared as an UNESCO heritage site. These mangrove forests are spread across a total area of 10,000 square kilometer (out of which 4,000 sq. KM are in India). While Sundarban tigers are the biggest tourist attractions here, but a Sundarban tour is also about taking back home a bag full of unique experiences. And this makes Sundarban one of the most appealing places to visit near Kolkata.

Named after the ‘Sundari’ trees that makes up the jungles here. Mentions of the Sundarban can be found in many prominent Bengali literary works starting from the 13th century. The British declared Sundarban as a reserved forest way back in 1865 and it became a national park in 1984. While the biggest attractions of Sundarban delta are the Royal Bengal Tigers, there are many other animals inhabiting in this swamp land. Some such animals include the estuary crocodiles, Olive Ridley turtles, fishing cats and flying foxes. During the winters the banks of the water-bodies are filled with many species of colorful migratory birds. The best season for a Sundarban tour is between November and March. So, if you are planning a trip to Sundarban, here are some important information you would love to know.

How to reach Sundarban?

By train: Nearest railway station to Sundarban is at Canning (48 KM away). However, tourists generally prefer to get down at Howrah or Sealdah railway stations and visit Sundarbans by outstation cabs.

Onward Journey: You can travel to Namkhana (105 KM away), Sonakhali (100 KM away), Raidighi (76 KM away), Canning (64 KM away), Najat (92 KM away) from Kolkata. Motor launches are available from all these towns that take you into the Sundarbans national park.

What is so unique about Sundarban? 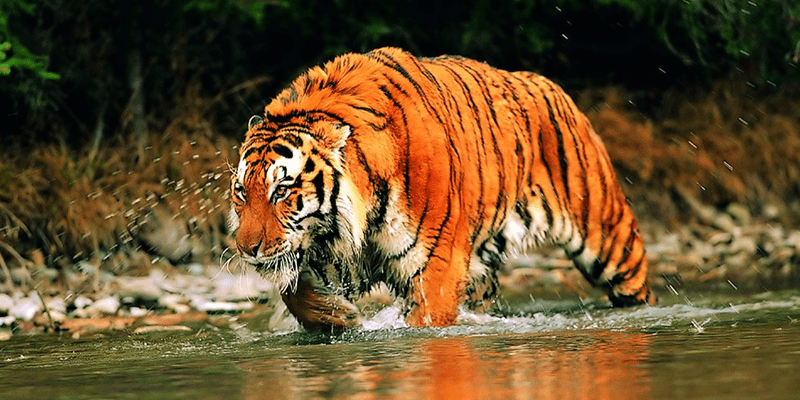 Well, there are many reasons to visit Sundarbans national park even if you have already taken a trip to other Tiger hot spots of India. First of all, the eco-system in Sundarban is completely unique. While other national parks and Tiger reserves are land-based, this one is built around water! Secondly, experts believe the Tigers here are rare specimens. While co-existing with the humans and dwelling in water surrounded settings they have picked up many unique skills. The Sundarban tigers are not afraid of humans (which animals in wilderness usually are)! They can also swim in the water, which again defies the general behavior of Tigers across the world. Apart from this, Sundarban tours can be done only on boats. And the boats wriggle past forested zones of Sundarban. Occasionally you get a glimpse of crocodiles sunbathing on the banks and colorful birds. But if you are lucky you can witness a Tiger crossing the water or waiting on the shores for its prey! 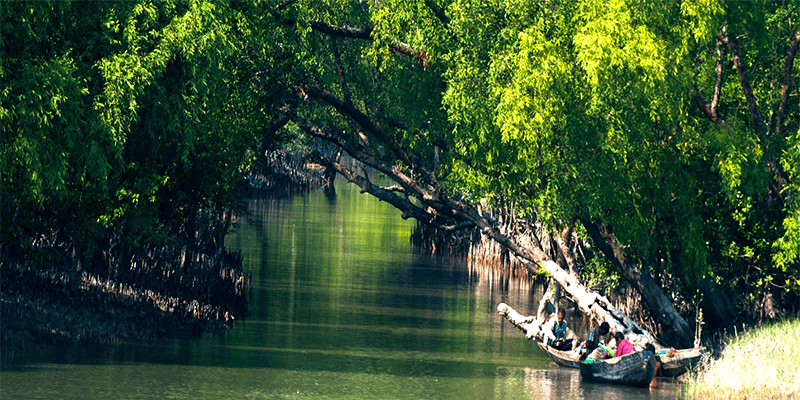 The safari experience at Sundarban is unlike any other. It has to be done totally on boats! You will be going through the creeks and rivers, mostly during high tide time (as the flow of water makes the channels easy to navigate). During the low tide, marvel at the “mudflats” (tracts of lands that are only seen when the water recedes). You can choose between AC or Non-AC boats for your safari. For a day trip, the boats will take you to different watchtowers around the core area of the forest (such as Sajnekhali and Sudhanyakhli). If the safari is more than one night, then your boat will halt at Gosaba (the biggest town before the forest starts). If you have opted for a houseboat style accommodation in Sundarban, then the boat would dock near an island or village just outside the main park area.

As for animal spotting, the chances of spotting a Royal Bengal Tiger in its natural habitat are amplified if you take a tour of the national park during the low tide hours. But don’t feel disheartened if you don’t spot a tiger; enjoying the natural mysterious beauty of the mangrove forest is what makes Sundarbans so special! 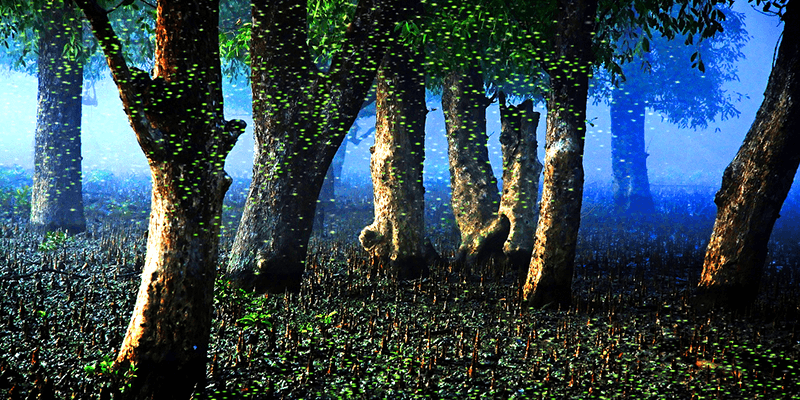 If your Sundarban tour coincides with a new moon night, then do care to take a local boat and witness a rare phenomenon of nature. The local boats would take you to the creeks just outside the forest area where you can see the Phytoplankton. These are small micro-organisms that glow in the dark! So, a moonless night is the best way to see Sundarban Glowing Forests. The scene will look straight out of the movie “Life of Pi”! 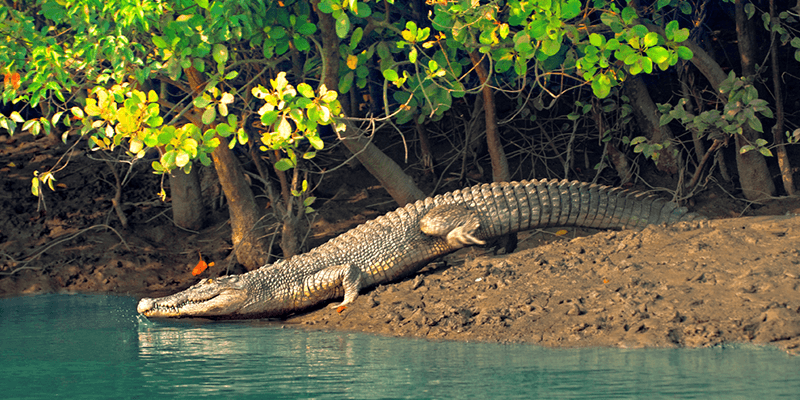 Situated at the confluence of the Saptamukhi River, Bhagabatpur Crocodile Sanctuary is an abode of the estuary crocodile. You can explore this immensely beautiful forest area during the Sundarban safari. Situated close to Sajnekhali, you can watch crocodiles of varying ages and sizes here. If you have a special interest in these reptiles, do care to book a guided tour. 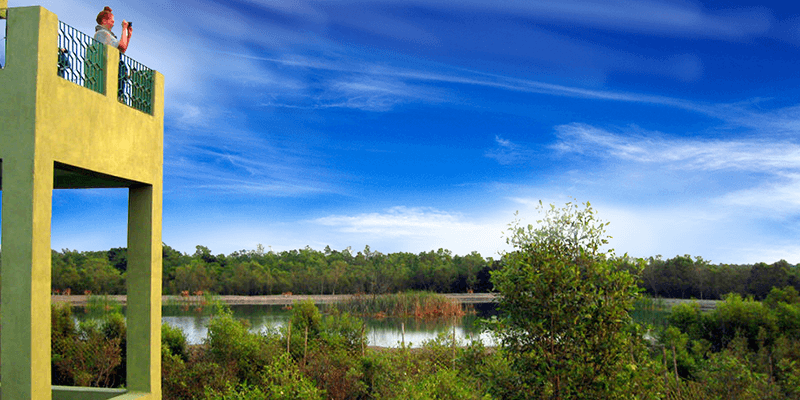 Dobanki, Sajnekhali and Sudhanyakhali watch towers of the Sundarban national park are popular and conveniently located. But the drawback of these watch towers is that they remain ever crowded. The crowd and the noise at these watch towers makes spotting a wild animal very difficult. So, you need to visit a less popular watch tower for better wildlife spotting chances and Burir Dabri is the answer. It is a wooden watch tower located near Netidhopani. Burir Dabri not only offers a panoramic view of the Sundarban forests, it also provides a great view of the India-Bangladesh international border as well as the silently flowing Raimongal River. 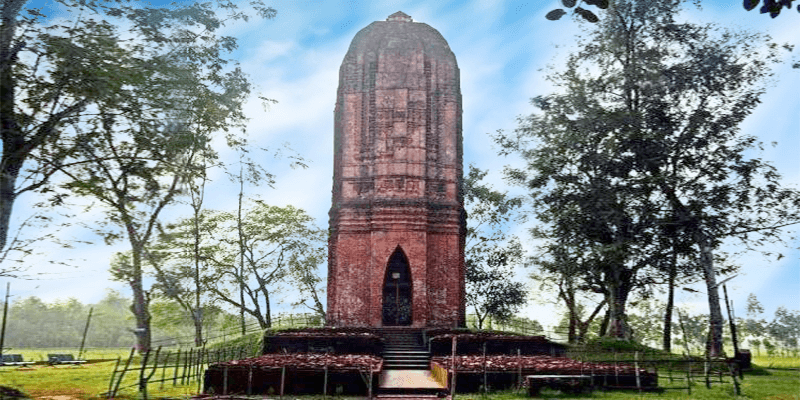 A mythical place, Netidhopani is believed to be the place where “Behula” (from “Manasamangla”) met the washer woman of the Gods, Neti Dhopani who helped her to reach heaven and plead for her husband’s life from the gods in Indra’s court. Today, there is a 400-year Shiva old temple standing in Netidhopani as well as a watch tower.

Other tourist places near Sundarban

Planning a trip to Sundarban? Use the travel services of RailYatri to make have a hassle free Sundarban tour.